Ellen Adarna took to social media to greet her mother-in-law, Remedios Ramsay, on her birthday. 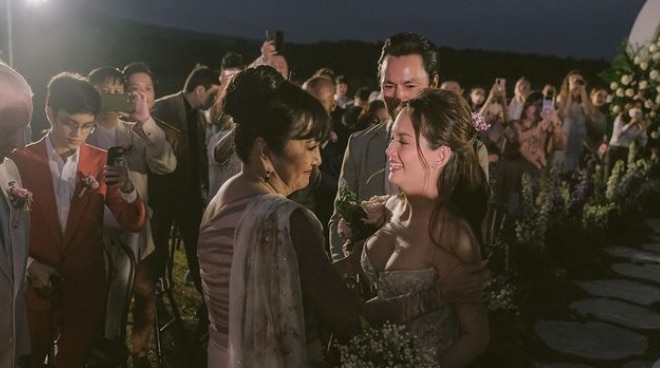 Ellen Adarna took to social media to greet her mother-in-law, Remedios Ramsay, on her birthday.

In an Instagram post on Monday, November 22, the actress shared a photo of herself with the elder Mrs. Ramsay, taken during her recent wedding to actor Derek Ramsay.

"Happy Birthday to my kind, beautiful, wonderful and ever reliable Mom… Tita… Mom Tita? Tita Mom? Mom? Hehehe. I'm not used to it yet," she said.

"Momomomomom, I am so lucky to have you… because… takot na takot si Derek sa ‘yo. Nyahahahaha," she added, followed by the hashtag #mothersknowbest.

Reacting to her post, Derek wrote: "You are so cute."

For his part, the actor also shared his short but sweet birthday message for his mother on Instagram.

"Happy happy birthday Mama. You are the strongest and most loving person I know. Thank you for being the ultimate mom. Love you so so much," he said.

Ellen, 33, and Derek, 44, tied the knot before their family and friends at a luxury resort in Bataan last November 11.

During his wedding vow, the actor admitted that even his parents had found his decision to marry Ellen rather rash.

"When I told my parents I wanted to marry you, they asked me why, because they felt it was too fast and too soon. And I told them, in my 44 years, have I ever mentioned the M word to you guys? I guess that question made them realize how serious I was and how happy I was to have you and how you've made me," he said.

It was in March this year when Ellen and Derek surprised their fans with news of their engagement.

The two made the announcement just a month after they admitted their relationship to the public.

"My heart tells me if I don’t follow through with this one, I’ll regret it. Everything in my heart is telling me that, she’s the one," Derek previously claimed.

"He met me at the right time," she said. "[When I met him] I was already complete. When [he] came, he just made it better, more beautiful. So, timing si Derek talaga."