Karen Davila and Lyca Gairanod celebrated their birthdays by giving back. 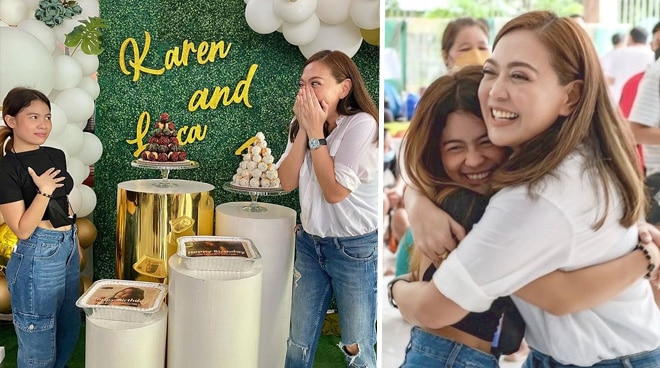 Karen Davila and Lyca Gairanod celebrated their birthdays together by giving back to the community.

It can be recalled that in Karen's past vlog, the broadcaster's reaction to Lyca when the latter revealed that they have the same birthday became viral on social media. Karen then promised the young singer that they will be celebrating their natal day together.

"For this birthday, I didn't want it to be about me and Lyca. But we wanted it to be about other people. May pandemya po tayo ngayon and what we wanted to do is help people and give them gifts," Karen said in her birthday vlog.

Karen and Lyca handed over bicycles, mobile phones, pocket wifis, and shirts, among other items, to the residents of Lyca's barangay in Cavite. They also prepared sumptuous food for everyone.

Lyca also offered a musical performance for her visitors.

In the vlog, Karen also shared the biggest gift she received this past year.

Read: Karen Davila reacts to memes of her viral interview with Lyca Gairanod

"And another thing is there is so much to be grateful for, my kids, my family, lahat po kami, we are safe. Sometimes we don't need much in life. What's important is we don't forget what we have," Karen added.