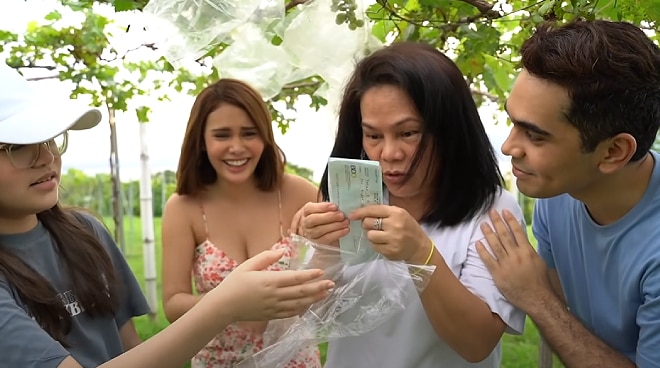 This was the reaction of Ivana Alawi's mother after the actress-vlogger gave her checks worth P1 million as a belated birthday gift.

In her video uploaded Saturday, November 13, Ivana explained that she gifted her "Mama Alawi" money as the latter had wanted little in terms of material things.

She also said that it was her way of making it up to her mother after she fell sick on her birthday and was not able to join the family's celebration.

But as seen in the now-viral vlog, the actress did not simply hand her mother the checks. Instead, Mama Alawi had to search for all 10 checks at the resort's extensive grape vineyard in just under a couple of minutes.

You can check it out at the 9:05 mark of the video below:

In total, Ivana's mother received P1.2 million as a birthday present from her children, as the popular vlogger revealed that her siblings, Hash and Mona, also gave Mama Alawi P100,000 each on her special day.

Ivana, who is one of the most popular YouTubers in the country, is not one to hold back when it came to surprising her mother and siblings.

Just last January the actress made headlines after she surprised her mother with a brand new car.

She also trended last year, after surprising her brother with a land title, and her younger sister an expensive laptop as a gift on her birthday.