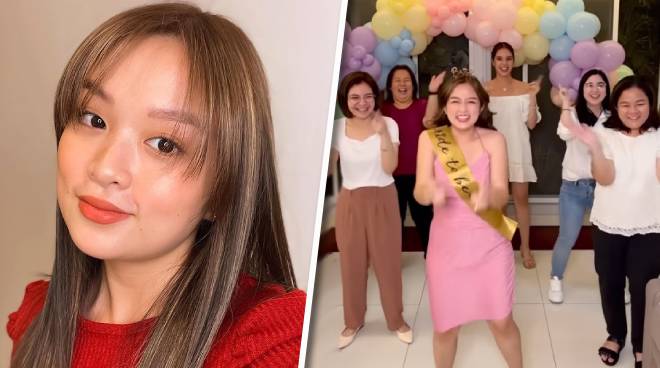 Trina Legaspi — more popularly known to her fans as ‘Hopia’ — will finally be Mrs. Jarina less than a week from now. But before her big day, some of her closest friends threw in a special surprise for her.

On Instagram, Trina shared a video of herself dancing to Meghan Trainor’s “Me Too” with some of her friends from her bridal shower. Actress Michelle Vito, one of Trina’s closest friends, was also in attendance.

Julia Montes, who will be one of her bridesmaids at her wedding, was noticeably not at the said event.

READ: Julia Montes will be a bridesmaid at Trina Legaspi’s wedding

“Huling hurrah bago ikasal! 6 days na lang till wedding!” she wrote in the caption of her post.

A week prior, Trina’s friends from high school also organized a bridal shower for her.

Over the past couple of weeks, Trina has been sharing photos from her countryside-inspired preneup shoot.

“We’re headed back to the countryside for our prenup shoot. Here’s to the future Mr + Mrs Jarina! Love doesn’t always come easy, but that’s what makes it worth fighting for,” she said in one of her posts.

Trina got engaged to Ryan in November last year. Her wedding was moved to a later date after her family contracted COVID-19 in September.

“Praying for complete healing from COVID-19 for my family and financial provision,” she wrote in a post.

Trina is best known for her stint in the now-defunct ABS-CBN kiddie gag show Goin’ Bulilit.

She has also appeared in various Kapamilya shows throughout the years including Luv U, Nathaniel, A Love To Last, as well as numerous episodes of Maalaala Mo Kaya and Ipaglaban Mo.