Shiela de Leon, the mother of McCoy de Leon, did not hesitate to answer when asked by her son's partner, Elisse Joson, whether or not she approves of their relationship. 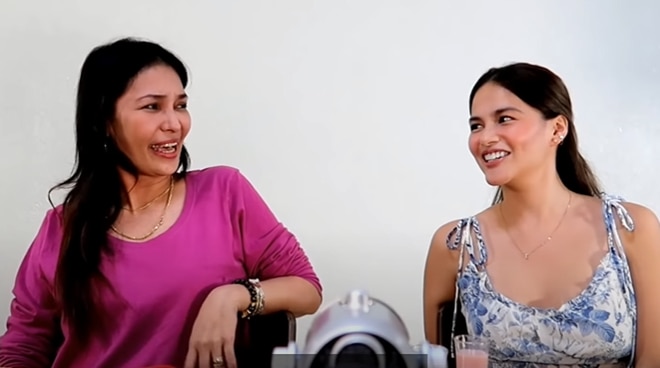 Shiela de Leon, the mother of McCoy de Leon, did not hesitate to answer when asked whether or not she approves of her son's relationship with his partner Elisse Joson.

Elisse herself asked the question during a game of "Who Knows McCoy Better?" with the actor's mom, as seen in a now-viral vlog she posted on YouTube on Wednesday, November 10.

After taking turns answering questions about McCoy—such as the actor's favorite movie, the thing he's most afraid of, and what he usually does when he's feeling sad—Elisse was given the chance to ask Mrs. de Leon a question that she had wanted to ask her.

To which, the latter quickly answered, "Approved na!"

The brief yet touching moment marks the first time that fans were given a glimpse of Elisse's close relationship with McCoy's mother. It came after the couple made the surprising revelation that they are now parents to a baby girl.

"To the De Leon family, Mommy She, daddy Lo, Thank you for McCoy. Thank you po for welcoming me and Felize into your family. I've always wished to have a big family someday and now our baby is very lucky to be with a big, happy family," she said.

She also thanked them for loving Felize, and for guiding her and McCoy as they begin their own journey as parents.

"Thank you for loving Felize. Thank you for guiding us into starting our own little family... for helping us handle our relationship better, for motivating us to always do more, for all the advice and family gatherings. I'll cherish it all. We appreciate everything you do for us. We love you po," she said.

Elisse and McCoy revealed being first-time parents to Felize in an episode of the reality show Pinoy Big Brother Kumunity Season 10, which saw them returning to the iconic yellow house to ask Big Brother to be the godfather of their baby girl.

The two met during their stint as housemates on the reality show Pinoy Big Brother: Lucky Season 7 in 2016. Their pairing, dubbed as "McLisse," spawned a following for their sweet on-cam moments.