Celebrities express their happiness and congratulate Elisse Joson and McCoy de Leon following their announcement that they now have a child together. 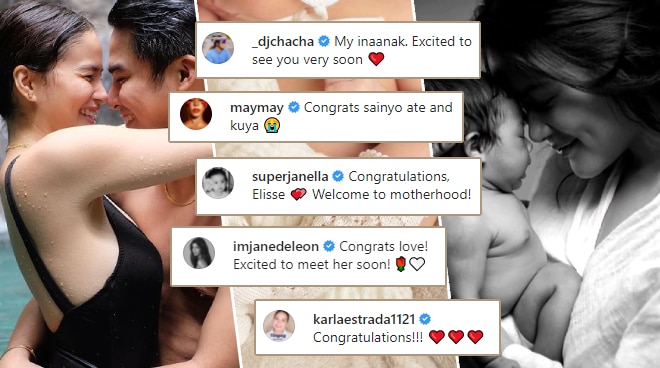 Local celebrities expressed their happiness and congratulated Elisse Joson and McCoy de Leon following their announcement that they now have a child together.

The couple made the big revelation in Sunday's episode (October 31) of the reality show Pinoy Big Brother Kumunity Season 10, which saw them returning to the iconic yellow house to ask Big Brother to be the godfather of their baby girl.

PBB ex-celebrity housemates Mccoy De Leon and Elisse Joson announces they have a baby girl, asked Kuya to be "Ninong".

Hours after the episode aired, Elisse took to Instagram to give the public a glimpse of their baby daughter, whom they named Felize McKenzie.

"Our little angel, ready to say hello to the world," she wrote in the caption.

The actress, who is a first-time mom, also shared her touching message for their baby girl.

Congratulatory messages poured in for the couple in the comments section of her post, including those from their showbiz friends and colleagues.

Jinri Park, who is a known close friend of Elisse, also reacted to the post, saying: "Omgg you have a baby before me hahahaha. Can’t wait to meet her! And what a lovely name! Congratulations."

McCoy, 26, and Elisse, 25, met during their stint as housemates in the reality show Pinoy Big Brother: Lucky Season 7 in 2016.

Their pairing, dubbed "McLisse," spawned a following for their sweet on-cam moments. They eventually became an official couple, but broke hearts in 2018 when they confirmed that they had broken up.

However, after a year apart, McCoy confirmed that he and Elisse had gotten back together in an interview last June.

In a recent vlog, Elisse described her current relationship with McCoy as more mature and real.