McCoy de Leon credited his girlfriend Elisse Joson as instrumental in his fight against depression and anxiety. 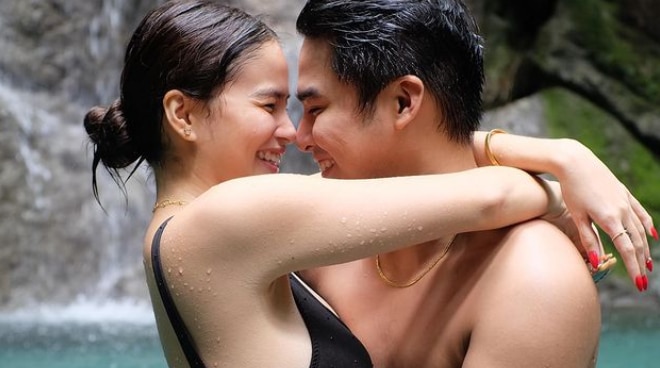 McCoy de Leon credited his girlfriend Elisse Joson as instrumental in his fight against depression and anxiety, saying the actress was there for him even they weren't exactly on good terms at the time.

In a heart-to-heart conversation in Elisse's most recent vlog, the couple, who confirmed having rekindled their romance in June, shared how they reconnected after their headline-making breakup in 2018.

According to the actress, it all started when the actor let her borrow his jacket after she felt cold at an event.

McCoy said it was the first time that he felt things were much better for him and Elisse since their painful split.

The couple said their second encounter happened at a coffee shop inside the ABS-CBN compound.

And the actor did take that one as a sign, and decided the next day to send Elisse a message through Viber.

When they finally got to talk, McCoy told Elisse that he wanted someone to talk to. Apparently, the actor was going through depression and anxiety at the time, and he decided to reach out to Elisse to ask her how she got through her own struggles with her mental health years prior.

Elisse said that despite their situation, she decided to help McCoy, as she knew how secretive he could be from other people about his emotions.

They eventually became an official couple, but broke hearts in 2018, when they confirmed that they had parted ways. At the time, neither of the two talked about the details of their split, but both did admit that they were hurt by what happened.

During their conversation, the two also discussed their painful breakup, with McCoy admitting that it was he who walked away from their relationship despite believing it was worth fighting for.

For her part, Elisse confessed that she resented McCoy for giving up on her, saying she felt betrayed and left behind by what he did.

Nevertheless, the two have since moved on from their painful past, and are in fact grateful for the experience as it only strengthened their relationship as a couple.