Former Miss Universe Pia Wurtzbach made sure to show her respect for Saudi Arabia by wearing the traditional abaya and hijab. 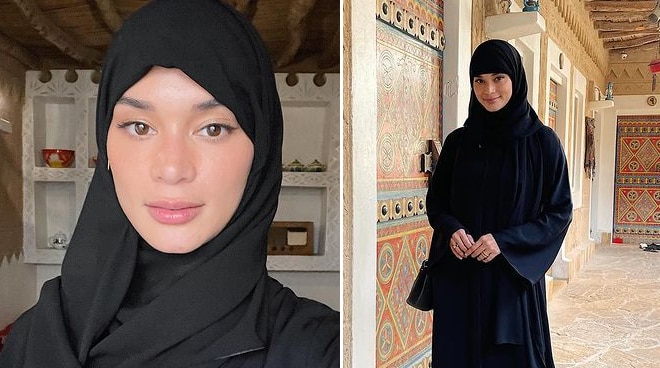 So former Miss Universe Pia Wurtzbach made sure to show her respect by wearing the traditional abaya and hijab, a full-length black robe and a headscarf worn by Muslim women.

On Thursday, October 28, Pia took to Instagram to share several photos of herself in the all-black outfit, as well as the food she ate and the places she visited on her first day in the country.

"Sabah alkhayr! (Good morning!) It’s my first time to visit and I’m really happy to be here. My first day in KSA looked like this. Swipe left!" she wrote in the caption.

In an Instagram Stories update, Pia explained why she decided to wear an abaya despite Saudi Arabia no longer requiring it from its female visitors.

"Saudi Arabia. My first time in this beautiful country. Heard you didn't have to wear an abaya anymore (in some public spaces) but I still want to. To be respectable na rin and I actually find it elegant," she said.

This isn't the first time that Pia was pictured wearing a hijab. In 2016, the Filipina-German beauty queen donned an all-black jumpsuit and a matching headscarf during her trip to the United Arab Emirates (UAE).

She was tapped to judge the competition, alongside fellow Miss Universe Andrea Meza.

While in South Africa, Pia enjoyed a Safari tour with Andrea at the Aquila Private Game Reserve and Spa in Western Cape. She also reunited with Miss Universe 2018 Catriona Gray, who was chosen to host the pre-show and backstage access of the pageant.

Recently, the titlist made headlines after she announced that she now has 13 million followers on Instagram.

"13 million confidently blue-tiful souls. Love you all!" she said as she marked the milestone on the image-sharing app.

At 13 million, Pia is one of the most-followed Filipino celebrities on Instagram, alongside the likes of Anne Curtis, Liza Soberano, and Kathryn Bernardo.