EXCLUSIVE: Nico Bolzico shares why he is raising daughter Thylane to be a pet lover

Celebrity dad and animal lover Nico Bolzico talks about how his pet dog Pochola helped him prepare for fatherhood. 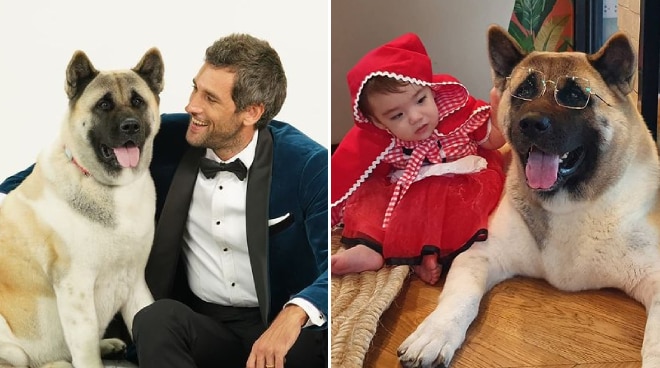 As half of one of the most active celebrity couples on Instagram, Solenn Heussaff’s husband Nico Bolzico is known for sharing snippets of his family’s daily life on social media. That includes not just videos showing his wife and their only daughter Thylane, but also the furry members of their family as well which include pet dog Pochola and cat El Gato.

The Argentinian born businessman said he has had a big heart for animals for as long as he can remember.

“I started becoming an animal lover probably since I have my earliest memory. I was born on a farm and I was surrounded by animals. My first pet was a dog, we call him Chicho and then I have a second dog that, together with Pochola are the two dogs I love the most. Today Pochola is much more important. So yeah, I’m an animal lover since I was born,” he shared in an exclusive interview with PUSH for Filipino-owned dog brand Doggo.

Before the arrival of their daughter Thylane last year, Nico said it was Pochola who became their first big responsibility together and helped them prepare for parenthood.

“With Pochola, we decided let’s get a dog and suddenly, Pochola was there and the switch was really fast. Before that, it was a long process and we searched and researched.  She changed everything because of course before Thylane, Pochi was here. She became our responsibility. She’s a big dog, so we walk her three times a day. We feed her and ensures she sleeps well. She sleeps with us in the room by the way. Back then, I dedicate one to two hours of my day to Pochi and I loves it. She gave us a sense of responsibility and then when Thylane came into the picture, we loved Pochola even more because Tili loves Pochola so much and Pochi protects and loves Tili so much that is kind of a multiplier effect in terms of love. Pochi is family for us,” he said.

Even after becoming first time parents, Nico said their pets already had a permanent place in their home, with their daughter benefiting from growing up around animals as well.

“After having a baby we continue to have pets. We thought as I said before that having a baby will pay much less attention to the pets, but it’s the opposite because Thylane loves Pochola. She loves Patato (their pet turtle), she loves Negroni, and it’s like a whole positive cycle. There’s a lot of things here that are going on but you know Thylane learns how to be around animals. Her development is amazing and we see Pochi loving and protecting Thylane so much. When there are people we don’t know who are coming here in the house, Pochola is the first one to stand between Thylane and anyone else. And it is good to see that even if Pochola is a big dog, when Thylane is around she becomes the most gentle and careful dog ever. She is so careful with Tili so it’s really amazing I don’t know how to think about our home without Pochi today,” he said.

This year, their dog became a certified celebrity as well when they received an invite for Pochola to become an endorser for Doggo.

“When they approached us, it was a no brainer. Of course, when we checked the brand, it was amazing. It’s super aligned with everything we believe and not only the brand but also the people behind the brand. It is great and amazing to have a partnership with Doggo and you know, the shoot with Pochi was very, very fun and a bit challenging because Pochola has her own way, and her own mood. If you ask her to sit she might probably walk, and if you ask her to walk she might probably sit. It was a really fun shoot with them and everyone was helpful, and they were other dogs too. It was actually very enjoyable and with Pochi around, with pets around, and of course the team from Doggo was amazing, helping behind the scenes and I love that video, a nice video about how everyone was helpful,” he recalled.

Just like any responsibility, Nico said having a pet needs love and devotion too. “Pochi is a pretty high maintenance dog because she sheds and she eats a lot, she needs to walk a lot but it’s enjoyable to do. Thylane is helping me so it’s even better. For the Doggo products, the snacks, the treats are amazing because they help her. The treats have vitamins for her coat, and there are so many health benefits. Best of all, Pochola loves them. All of the toys are good, and super fun. Pochi always needs to be nibbling something, so that is perfect. I love the water dispenser. When we go on our long walks with Pochi, it’s hot and Pochi needs to be hydrated all the time. Having the water dispenser with a bowl is really super helpful. The leash is amazing, the shampoos are amazing. To be honest, Pochi uses very thing and we cannot be happier,” he added.