Mel Sarmiento has this promise for future wife Kris Aquino 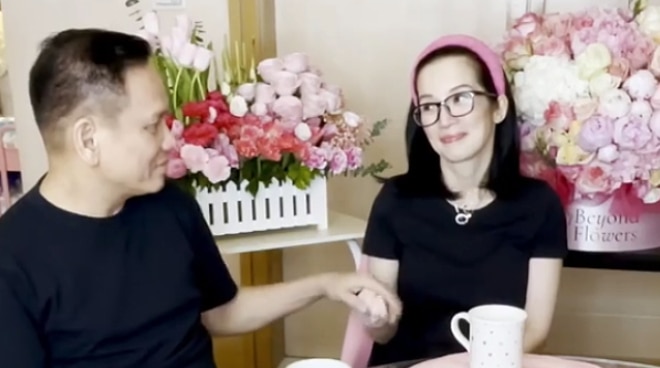 "I can no longer imagine life without him."

This was what Kris Aquino said when asked about how she felt when her fiancé, former Interior Secretary Mel Senen Sarmiento, asked her to marry him.

Last Sunday, October 24, the couple made headlines after Kris announced her engagement to Sarmiento through an Instagram post where she referred to him as her best friend and "the man I said yes to spending the rest of my life with."

She also said that while she is proud to be an Aquino, she is looking forward to becoming a Sarmiento.

In an interview with her youngest son Bimby, Kris refused to go into details about the proposal, but did gush about her engagement and relationship with Sarmiento.

“I will spare him the embarrassment of saying what happened. But I’ll say na what you (Bimby) told me, parang it left such a big impression on me. Na you said na, ‘Mama, you must really love him because you’ve always said na in this house there can only be one drama queen, and that’s you. But you let him get away with that stunt and allowed him to be the drama king. The fact that you allowed him to do that means you must really love him,'" said Kris.

“I think that I can no longer imagine life without him," she continued. "And that’s why I said, you know, it’s really weird to admit this na our monthsary is actually a month after Tito Noy died. I guess that's why I said there was a matchmaker in heaven."

Kris and Sarmiento met through her late brother, former President Benigno "Noynoy" Aquino III, during his term in 2015. At the time, Sarmiento was serving as Secretary of the Department of Interior and Local Government (DILG). In June 2021, five years after he stepped down from his post, Noynoy passed away due to renal disease, secondary to diabetes.

Kris said that during the pandemic, she and Sarmiento got to know each other "so well, so fast." She also stressed how it meant to her that Bimby, the son closest to her, approves of Sarmiento for her.

Kris admitted that both she and her fiancé are a "continuing work-in-progress."

"Actually, bago ‘to shinoot, may dramahan na naman na nangyari. But you know, it’s the fact that we’re trying our best to work things out," she said. "You know, ‘yung parang we’re still adjusting pa rin, and you know, I have a tendency to overreact. And I like the fact na he knows when to acknowledge na he’s wrong. That’s why it makes it easier kasi I also say naman when I know I’m wrong."

For his part, Sarmiento shared how he knew that Kris is already the right person for him.

During the interview, Kris also revealed that she had met with Sarmiento's two sons along with Bimby, and that they thanked her for making their father happy.

"I said sorry to them that they weren’t seeing their dad as often," she said. "And then I was really touched when they said thank you, because they said that they’ve never seen their dad as happy. And I really felt that parang, ‘Woah, they must really super love their dad for them to say that.’"

"And when they left, when I was in the bathroom, I was really crying because I couldn’t imagine two boys near kuya (Josh)’s age saying that, thanking me for making their dad happy. So parang sabi ko, ‘Woah, this is something.’ Parang I just felt really, really touched by that.”

At one point, the former host also recalled her first kiss with Sarmiento, which she said had left her shocked.

"Out of the blue, he just kissed me," she said. "Sabi ko, my God. It was like a deep kiss talaga and parang sabi ko, ang lakas ng loob!

“And then I asked him, for someone so shy, paano mo nagawa ‘yun?” she added, to which Sarmiento responded with a laugh, "Hindi ko mapigilan, eh. At least you didn’t stop me, so.”

When asked for their message to each other, Sarmiento promised to take care of Kris and spend the rest of his life with her.

“Aalagaan kita. At kasama mo ako sa buong buhay natin," he said, before kissing the actress on the lips.

Meanwhile, Kris said it would be stupid of her to let go of Sarmiento.

“For the longest time it’s… Kasi si kuya (Josh) has chosen to be independent in Tarlac. And, you know, it really mattered to me na the man I would end up with will also really love Bimb because for so long it’s just been the two of us. And the fact na you showed me talaga na with no hesitation that you’re ready to step in, and the fact that you try your best to make me happy and I really feel how much you love me. That’s why parang ang tanga ko na kung pakawalan pa kita," she said.

"And I really also…Ako madali sa akin mag-express ng sarili. But I love you, and I told you I love you with all my heart…For whatever’s left of my life, you have me," she added.

In her most recent update, Kris promised to give her avid followers a glimpse of her upcoming wedding to Sarmiento.

"I will upload that, of course, pero 'pag natapos na," she said.

For now, the actress said she will focus on regaining her strength and on the preparations for their much-awaited big day.

"Until our next surprise," she said.