Dominique Cojuangco shares romantic moment when her fiancé proposed to her

Dominique Cojuangco gave a glimpse of the proposal of her fiancé, Michael Hearn, more than a week after she announced that she is now engaged. 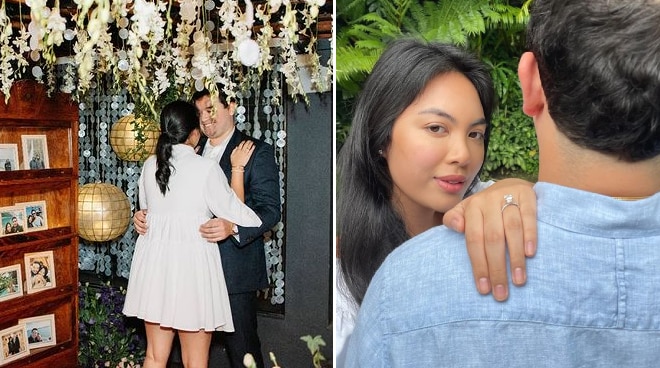 Dominique Cojuangco gave her social media followers a glimpse of the proposal of her fiancé, Michael Hearn, more than a week after she announced that she is now engaged.

On her Instagram page, Dominique shared a photo of the exact moment when her fiancé went down on his knee and asked her hand for marriage. She simply captioned the post with a heart on fire emoji.

In his own Instagram update, Michael shared that he proposed to Dominique "on the spot where [they] first reconnected after many years." Though he did not specify the exact location, the businessman confirmed that it happened in Manila.

It was last October 14 when the couple announced that they are getting married, as they posted photos showing Dominique's massive engagement ring.

"For life," Dominique captioned her post, while Michael wrote, "On to the next chapter with [Dominique]."

Dominique's mother, Gretchen Barretto, also shared her thoughts on the engagement of her only child in an Instagram post last week.

According to the former actress, she could not believe that she will be planning her daughter's wedding at the age of 51.

"I don't know where and how to start (I never had one and never planned one ever)," she admitted. "Tony has reminded me multiple times to allow our child to enjoy the process of planning."

In her post, Gretchen also expressed her excitement over becoming a mother-in-law, as she referred to herself as "soon to be the mum in law" of Dominique's fiancé.

Dominique, 26, is Gretchen's only daughter with her partner, business tycoon Tonyboy Cojuangco.

Before obtaining a degree in Associate of Arts degree in Merchandising and Marketing at FIDM, she took up fashion design at Istituto Marangoni in London.

Aside from being a couple, Dominique and her fiancé are also business partners. Early this year, they put up The Collective, a skincare line that aims to "demystify skincare and beauty" to make them easily accessible to everyone.