Stylist to the stars Liz Uy and her husband, businessman Raymond Racaza, celebrated their first anniversary as a married couple on Wednesday, October 20. 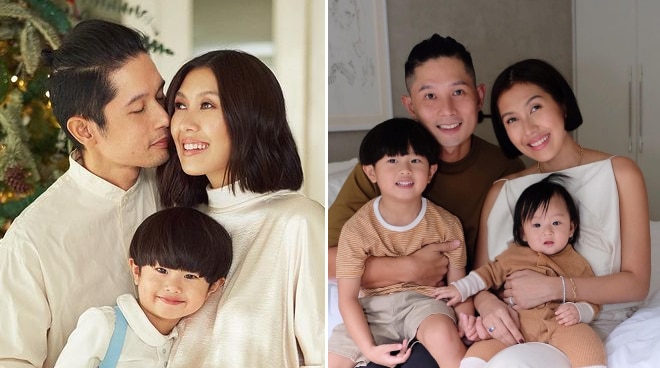 Stylist to the stars Liz Uy and her husband, businessman Raymond Racaza, celebrated their first anniversary as a married couple on Wednesday, October 20.

On Instagram, the celebrity stylist marked the special occasion by sharing photos of their family, along with a clip of their eldest son Xavi handing her a bouquet.

"Yesterday, we celebrated year one of many, many years to come. Together, with Xavi and Mati, it was as always - PERFECT," she wrote in the caption.

In a previous interview, Liz revealed that it was her good friend, actress Isabelle Daza, who introduced her to Raymond at a business meeting in May 2016.

Months later, the stylist found out that she and her then-boyfriend were expecting a child.

Liz gave birth to their son, Xavi, on September 20, 2017 in the United States. However, it was only in March 2018 when she introduced their baby boy to the public.

Raymond, whom the article clarified to be “estranged from his wife, and who has since been annulled," described Liz as a very pro-active mom.

“She’s a very hands-on mom, especially with the round-the-clock feeding. Despite her other obligations, she would always rush home to be with our son. She is very down-to-earth and has no sense of entitlement. Everything she has accomplished was done through hard work,” he said.

In October 2020, with an Instagram snap of herself wearing a large diamond ring, Liz announced her engagement to Raymond.

Months later, she shared the exciting news that they were expecting their second child together.

The celebrity stylist made the announcement in a piece she wrote for The Philippine Star in December 2020.

“We were closing in on the fourth month of an endless lockdown when I found out that I was pregnant with our second baby. I ran to Raymond and we were both screaming in delight,” she recalled. "In the midst of a pandemic, we found this piece of good news filling up what was otherwise a glass half full of uncertainty in 2020."

At the time, she also revealed being married to Raymond, as she referred to him as her husband.

“I have a husband who makes motherhood an even greater journey. There is love, and there is unconditional love that I share with Raymond and Xavi, and soon enough, with our second child,” she said.