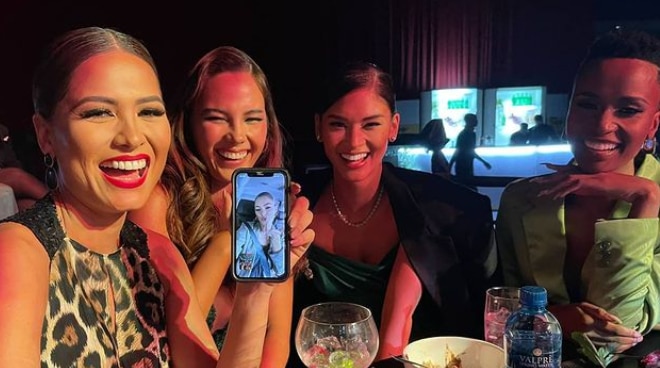 In a rare photo together, Miss Universe titleholders Pia Wurtzbach, Catriona Gray, Zozibini Tunzi, and Andrea Meza were all smiles as they bonded in South Africa.

The photo was posted by Catriona on Instagram on Sunday, October 17, showing all four queens gathered around a table while on a call with Miss Universe 2017 Demi-Leigh Tebow.

"Thank you soo much @stephweil @official_misssa for bringing all of us together! Finally got to sit down and spend some time with @piawurtzbach @andreamezamx @zozitunzi. Love these girls so much! Insert @irismittenaeremf and @demitebow! We missed you both!" Catriona wrote in the caption, along with the hashtag #Sisterhood.

She also posted a photo of her meeting reigning Miss Universe Andrea for the first time in a separate post, captioned, "About last night! Finally met our @missuniverse Queen @andreamezamx!!"

The titlists were in South Africa for the recently concluded Miss South Africa pageant, with Pia and Andrea having served as judges, and Catriona and Zozibini as hosts of the pre-show and backstage access.

Meanwhile, Catriona, 27, became the fourth Miss Universe queen from the Philippines when she won the pageant in 2018.

She was succeeded by Zozibini, 28, of Miss South Africa, who was crowned Miss Universe in 2019.

In 2020, Andrea, 27, won the prestigious pageant, besting the Philippines' Rabiya Mateo and 72 other candidates.

Lalela Mswane was proclaimed winner, after answering this question from Pia: "The elections are coming up. What are you looking for in a leader?"

"What I look for in a leader is somebody who's self-aware, very accountable, and encourages critical thinking, innovation, and action. But most importantly, prioritizes the personal development of every person in South Africa. I believe that phenomenal leader possesses all these qualities. Thank you."

Lalela, 24, will be representing her country at the 2021 Miss Universe, and will be competing against the Philippines' Beatrice Luigi Gomez and many other contestants from around the world.