‘Glitter and Doom’ star Alex Diaz talks about shooting in Mexico City with an international cast for the very first time. 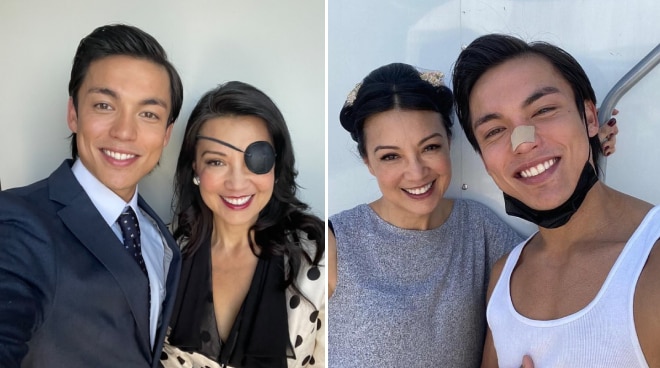 After announcing his first international film project Glitter and Doom earlier this month, Alex Diaz shared with PUSH his experience being in a US film and shooting in Mexico City. The 27-year-old actor, who starred in last year’s iWantTV series Oh Mando! talks about the difference in the audition process here and abroad.

“Auditioning in the Philippines has been a little different and difficult for me, personally. People are handpicked for roles and for many years that wasn’t my reality. Auditioning for international projects is a grueling process but what I appreciate is that it’s your talent and essence that is being looked at. I was from a different country and initially they weren’t looking to cast outside North America, but I was able to show my best and landed the role regardless. I was very excited. Mukhang challenging yung deliverables ng character from gymnastics to fire juggling but I’m always up for a good challenge!” he told PUSH.

In the film, Alex plays the role of Glitter, a carefree kid about to run away with the circus who falls in love with a musician played by British actor Alan Cammish. Glitter and Doom is an LGBTQIA+ musical which features songs from the award-winning duo Indigo Girls. Other Hollywood stars that are included in the cast are Lea DeLaria from Orange Is the New Black, with cameos by Tig Notaro (Army of the Dead) and Indigo Girls’ Amy Ray and Emily Saliers.

“Holy smokes. Meeting them all was incredible. I definitely was starstruck and I let them all know the moment we met! I was so starstruck with Tig that I completely forgot I watched her in Army of The Dead for a moment! She was really kind and courteous. She ended up sharing with me that she had a Filipino brother-in-law! I remember chasing her off-set after she’d wrapped just so I could get a selfie because I wasn’t happy with just the group picture haha! I only met Lea Delaria (Orange is the New Black) for a brief moment in the make-up trailer but she has this bubbly, light and infectious energy to her. We both agreed that we’re generally just happy to be here, alive and doing what we love—and getting paid for it! She’s a comedian so naturally she was hilarious and great at improvisation!” he explained.

Asian American actress Ming-Na Wen of the The Mandalorian plays the role of Alex’s mom in the film. Most Pinoys best know her as the speaking voice of Mulan in the Disney animated classic.

“My mama, Ivy is played by the beautiful and timeless Ming-na Wen! When I first met her, it was the day she had just arrived and was on-set doing a fitting for her costumes. I was really intimidated for some reason up until we actually sat down to do our first scene. I think we hit off really well and have developed a great Mother/Son dynamic on-screen, as well as a friendship offscreen. Ivy and Glitter have a very interesting dynamic that I know you will all love to watch and Ming-na adds a dimension to her that I wouldn’t have picked up while reading the script. She’s also taught me so much about acting and nuance in the short time we’ve been working together,” he said.

Shooting abroad was also no problem for Alex who enjoyed his time in Mexico City. “It was a challenge but the production team for the film and our COVID team has made it seamless and easy.”

Working with his co-star Alan Cammish was also easy according to Alex.

“Alan and I are very different. We come from different cultures and upbringings but it was this very reason that allowed us to grow so close. My first impression of Alan is that he was very charming and could hold a conversation very well. He’s also just a very detailed individual—he knows our sequences and the workings of our script so deeply. It was these very reasons that I was able to grow close to and learn so much from him. Chemistry was easy with Alan as we spent the first week chatting and hanging out every day. Even in the moments where the stress from work has brought friction between us, our strong foundation of friendship and commitment to work has only reinforced our friendship and help us grow deeper on and off screen,” he said.

One of the most unforgettable moments for Alex while shooting was to also get to act alongside singer Amy Ray, who is one half of the contemporary folk duo Indigo Girls whose songs are featured all throughout the film and are behind ‘90s hits like “Power of Two” and “Closer to Fine.”

“We shared a few scenes and I’ll never forget that. The whole time we were doing our scenes, she and I were exchanging stories and laughs. I told her initially that I didn’t know what to say I was so starstruck but she quickly brought me down to earth. Right now, I don’t know what else to say except that it was such an honor to talk to such a fantastic human. The Indigo Girls really created a safe space for so many people with their music and I felt that the whole time we were chatting. To be able to sing her songs to her and receive a compliment from her on my vocals—I am absolutely humbled and honored,” he added.

Glitter and Doom is directed by Tom Gustafson from a screenplay by Cory Krueckeberg.

Indigo Girls are behind the hits "Power of Two," “Closer to Fine” and “Kid Fears.” The duo also work on various issues like LGBTQ advocacy.