The rainy weather did not stop actress Heaven Peralejo from showing off her curves as she enjoyed a beach getaway with her friends. 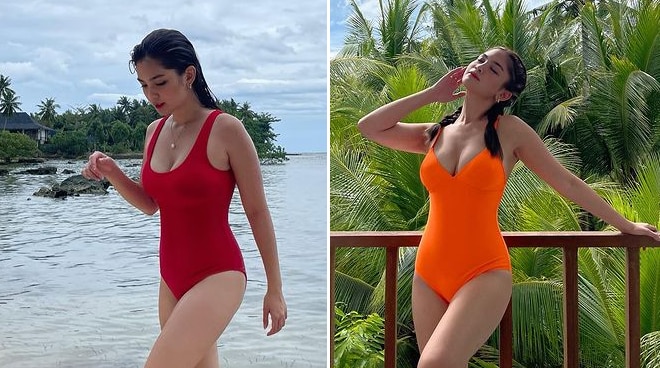 The rainy weather did not stop actress Heaven Peralejo from showing off her curves as she enjoyed a beach getaway with her friends.

On Instagram, the Pasabuy star’s fans were awestruck when she posted a photo of herself wearing a maroon bikini in Siargao.

In the caption, she wrote: "I can sea clearly now."

She also posted a photo of herself in red swimwear while posing by the paradise island’s shore.

"brb," she simply captioned the snap.

Just recently, Heaven made headlines after rumors of her breakup with actor Kiko Estrada surfaced.

It came just a month after the couple, who co-starred in the ABS-CBN drama Bagong Umaga, confirmed their relationship to the public.

The two first stirred rumors of a romance in March. At the time, Heaven was being tagged as the supposed third party in Kiko's breakup with his longtime girlfriend, Devon Seron—an allegation which the former vehemently denied.

In a recent interview, Heaven refused to address speculations of her breakup with Kiko, but stated that she is now committed to putting self-love first, after going through what she had described as "rollercoaster" months.

"There's more to it," she added, referring to a life well-lived.

The 10-part series, which is inspired by the modern version of "bayanihan" amid the COVID-19 pandemic, was written and directed by Xian Lim. New episodes drop every Friday at 7 p.m. on WeTV.