BGYO and BINI to drop new albums in October

ACEs and BLOOMs have another reason to celebrate as rising P-pop groups BGYO and BINI will be dropping new albums this month. 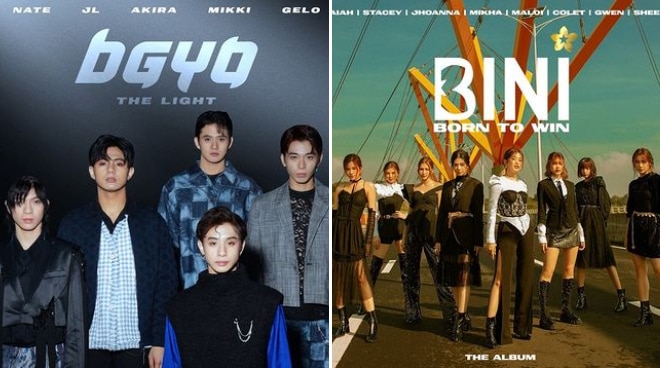 ACEs and BLOOMs have another reason to celebrate as rising P-pop groups BGYO and BINI will be dropping new albums this month.

BGYO will release the album The Light this coming Thursday, October 7. The record consists of a total of 12 songs, including "The Light", "He's Into Her", "When I'm With You", "Fly Away", "The Baddest", "Rocketman", "Sabay", "Kundiman", and Bahasa, Japanese, Thai, and Spanish versions of "The Light."

Ahead of the release of their album, the group will drop their new single "Kulay". The song, which marks the group's first all-Tagalog song, debuted last week, when it was used in a segment of the Miss Universe Philippines pageant.

Meanwhile, BINI is set to drop its album Born To Win a week later on October 14. The 12-track record will include songs such as "Born To Win" and "Kapit Lang." A full track list has yet to be released.

"What began as uncharted dreams for the eight young ladies of Philippine pop group BINI continues to blossom into one promise of an ever-growing future," an official description of the album reads. "Determined to shine their brightest and show the world what they're made of, BINI releases their debut album 'Born to Win', taking their passions to higher ground."

BGYO and BINI are expected to perform tracks from their new albums in their upcoming concert, One Dream: The BINI & BGYO Concert. Happening on November 6 and 7, the show will stream via ktx.ph, iWantTFC, and IPTV pay-per-view.

Aside from their back-to-back two-night concert, the sibling groups are also currently gearing up for their sets at the upcoming 1MX music festival. The show will take place on December 3.

#BGYO |🚨 SAVE THE DATES 🚨Here are all the dates you have to note for BGYO & BINI!#BGYOdebutAlbum#BINIdebutAlbum pic.twitter.com/GTDE5dB4bH

BGYO, which has five members, and BINI, an eight-member group, debuted in January and June, respectively, after training for two years under ABS-CBN's Star Hunt Academy.