Sandara Park got to satisfy her cravings for some of her favorite Filipino dishes courtesy of Jung-Il woo. 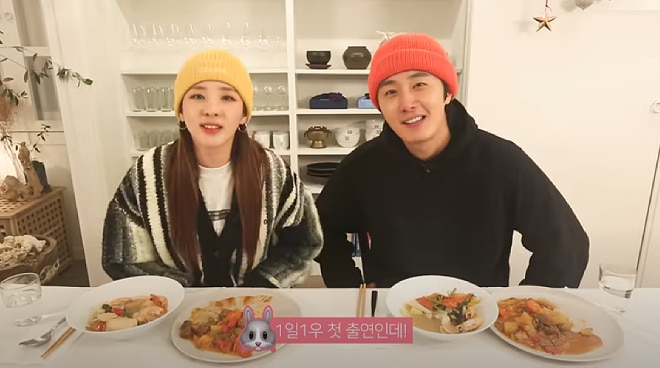 Il-woo, who admitted that he hasn’t been to the Philippines before, said he had to look up Dara’s favorite dishes online and learned how to cook them by watching videos on YouTube.

“I’ll be cooking some Filipino foods for Dara. I’ve actually never been to the Philippines before,” he said.

“I’ve never been there, but I tried my best to search information on YouTube. I also looked everywhere up for the Favorite Filipino menus of Dara.”

“Wow, I’m really touched,” Dara said. To which Ilwoo responded with: “I watched your YouTube videos, too.”

After finding out that Il-woo would be making sinigang for her, Dara’s eyes lit up and said: “Sinigang is my favorite. It’s my favorite menu out of all Filipino foods, and I never had my meals without it.”

Seemingly touched by Il-woo’s gesture, Dara said: “It’s simple but I don’t know how to make it. I mean … who is going to cook Filipino food for me in Korea?”

Right after cooking, the two sat of the table to taste the dishes they made together.

“This sinigang is pretty good, too. It kinda feels like I’m having the clear fish soup,” Il-woo said.

“I hope we could meet again soon when there’s another chance,” Dara told Il-woo. It just feels like I came here to make great memories,” she added.

In the said vlog, Dara and Il-woo talked about their friendship and the former’s favorite spots in the Philippines which include Boracay and Palawan.

Meanwhile, Il-woo and Dara assured viewers that made sure the shoot took place in a safe space.

“This was filmed at the privately rented studio with minimum number of staff,” Il-woo said.

A former talent of ABS-CBN, Sandara Park rose to fame after appearing in the reality talent search Star Circle Quest.

Jung Il-woo, on the other hand, is known for his roles in dramas such as The Return of Iljimae, 49 Days, Cool Guys, Hot Ramen, Moon Embracing the Sun, and Cinderella with Four Knights.

Having first worked together in The Return of Iljimae, Il-woo considers Dara as his only female friend.