‘I couldn’t even look straight at her’: Kris Bernal recalls fangirl moment with Alex Gonzaga

Kris Bernal says it was Alex Gonzaga who inspired her to start her own YouTube channel in June 2019. 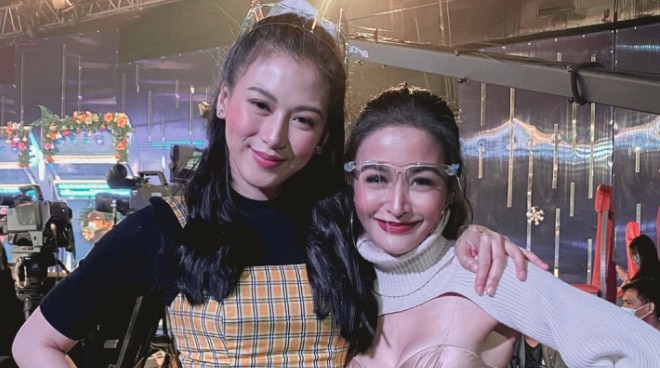 Kris Bernal took to social media on Wednesday, January 20, to recall a fangirl moment she had when she met fellow actress-vlogger Alex Gonzaga for the first-time last December.

"Here’s a little trivia about me: Did you know? Ever since I started binge-watching @cathygonzaga vlogs, I became motivated to start my own YT channel. Luckily, I had a chance to meet her in person last December," she said.

"Well obviously, in this picture, ang tigas ng katawan at ng mukha ko! Lol! I couldn’t even look straight at her. I was so anxious for a whole day because I really want to take a picture with her. Alam 'yan ng handler ko. I was supposed to vlog about it but my nervousness got in the way," she added.

Kris said she had just finished watching Alex's vlog about her wedding to her longtime boyfriend, young politician Mikee Morada, and went on to congratulate the newly-wed couple.

"God’s perfect timing is really the best! Congrats Mrs. Morada! Hope you’ll continue to vlog and spread good vibes to other people even if you’ll start a new journey!" she said.

"Aaaaw. Hi Kris!!!! Next time we see each other mas mahaba na sana chikahan natin!! Congrats also on your engagement. Ikaw na next!" she said.

Kris, 31, got engaged to her longtime boyfriend, Perry Choi, in February 2020.

The chef and businessman popped the big question to the actress during his birthday bash in Quezon City, which Kris herself organized. The two have been dating for more than three years.