A student from Pampanga got the chance to meet his idol, Efren ‘Bata’ Reyes. 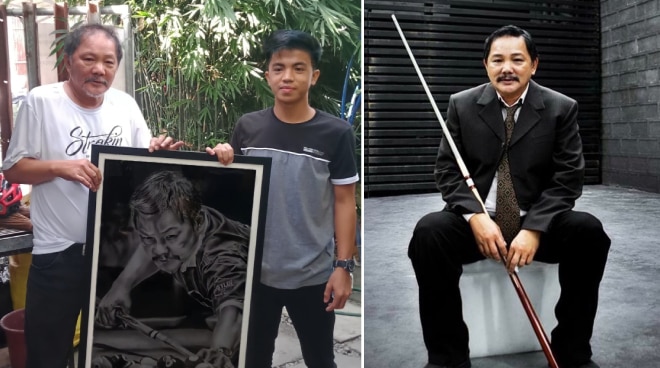 A teen named John Mark Dadulo from Mexico, Pampanga recently made waves online after he took to social media to share his achievement of meeting his idol, Philippine billiards icon Efren “Bata” Reyes.

A 19-year-old student, John Mark met with the professional pool player to give the charcoal painting he worked hard on for two months.

John Mark, who used the photo taken with Efren “Bata” Reyes as his profile picture on social networking site Facebook, described his meeting with the pool legend as a “dream come true.”

Efren “Bata” Reyes has over 70 international titles under his belt including world championships in two different pool disciplines — the first player to achieve such a feat. Also known as “The Magician,” Efren is considered one of the greatest pool players of all time.

Meanwhile, this isn’t the first time John Mark caught the attention of netizens as he previously did an art dedicated to Kapamilya star Andrea Brillantes. Some of his other works also featured other local celebrities as well as international ones.

According to ABS-CBN News, John Mark — who is currently taking up Industrial Technology — said he mastered the art of charcoal painting while on lockdown.

And as it turns out, his love for painting has also become a way for him to help his parents during the pandemic. His mother works as a laundry lady while his father does welding jobs for a living.