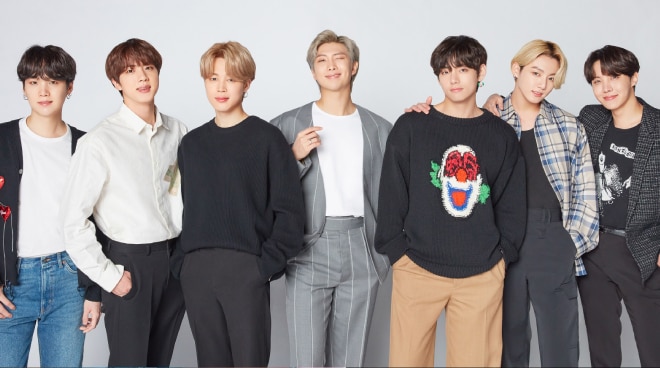 While fans (collectively known as ARMY) have yet to find out what’s in store for them in the coming months, Smart aims to inspire the Filipino youth through an upcoming campaign dubbed “Live Smarter, Live with Purpose” featuring the seven-piece group. “Aside from their remarkable talent, BTS emerged as the biggest band in the world because of their meaningful and uplifting music that brings hope and encouragement to fans especially in the bleakest of times,” Smart President and CEO Alfredo S. Panlilio said in a statement.

He added: “It is therefore a big honor to welcome BTS to the Smart family so we may inspire more Filipinos to find purpose in everything they do and ultimately live Smarter for a Better World.”

Known for defying boundaries through powerful messages in each song they put out for the world to hear, the Grammy-nominated artists couldn’t be more perfect to be onboard as Smart’s newest endorsers.

“Just like BTS who are able to inspire millions of young people all over the world through their music, Smart Prepaid aims to bring about amazing experiences to the Filipino youth through technology to make life easy, fast, and simple,” SVP and Consumer Wireless Business Head at Smart Jane J. Basas said.

“This way, the young generation are empowered to immerse in their interests and succeed with their pursuits,” she added.

Meanwhile, Smart released a video with members of BTS seen giving a message to their Filipino fans.

In unison, BTS opened the video message with a warm greeting to the Philippines before introducing themselves.

RM, for his part, said: “We're here to support SMART's goal to inspire our Filipino fans to live their lives with passion and purpose ... no matter the challenges that lie ahead.”

Since then, the septet has caught the attention of fans across different parts of the globe and broke one record after another in various platforms and programs including the Billboard charts.