Did you know? Bea Alonzo has a ‘ritual’ before going to sleep 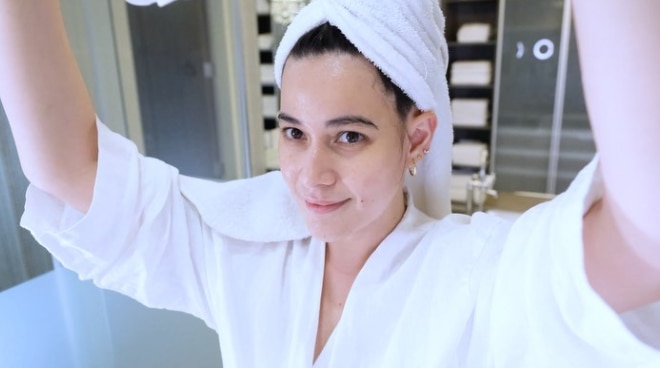 Bea Alonzo shared the secret to maintaining healthy skin — doing a skincare routine before going to sleep at night.

Having been in showbiz for almost two decades now, Bea has learned to take care of her skin — arguably one of the fairest in the industry — throughout the years.

“You know, I’ve always been into skin care since I started very early in showbiz. And we’re usually exposed under a lot of lights and we usually wear a lot of makeup during shoots and so it is necessary for us to take extra care of our skin and give it some lovin’, ” she said.

According to Bea, skin care isn’t a task but rather a “ritual.” “What I usually do is that I would set the mood first when I get home before I remove the makeup,” she shared.

“For me kasi ganu’n eh. Taking care of your skin or removing your makeup or putting on moisturizer or a mask shouldn’t feel like a task. It should be a treat. You should always look forward to it. And so, this is how I do it,” she said.

“First thing I do is a light a candle. Parang ritual na siya. And then I grab my scrunchie with my hair up. What I do is I grab my makeup remover,” she added.

Even when she is busy during shoots for movies or television, Bea said she makes sure that she removes her makeup.

“Tapos maglalagay ulit ako ng makeup because I usually breakout if I don’t do that. And I don’t know … parang mas refreshing. Parang mas bagong face, bagong day, you know. Normally kasi inaabot kami ng 3 in the morning,” she said.

The 33-year-old star — who usually takes a shower before applying makeup on her face — revealed that she uses a body scrub as well as a brightening soap bar. After taking her evening bath, she applies a body lotion all over her body.

According to Bea, she first applies a purifying cream cleanser which she massages all over her face before rinsing afterward. Then, she puts on a face mask on her face for twenty minutes. While her face mask is still on her face, she puts a lip scrub to make her lips look supple.

Then, she applies a facial moisturizer on her face after removing the mask. To seal the moisture on her face, she then applies advanced night repair serums on both her face and under her eyes.

LOOK: Bea Alonzo turns up the heat in Palawan

Bea also uses a lip ointment to moisturize her lips. To get rid of the bloat on her face, she uses a roller she bought from Germany. Finally, she sprays a "beauty elixir" on her face.

But Bea believes “beauty comes from within” so having a skincare routine simply isn’t enough to maintain healthy skin.

According to Bea, it’s important to get a lot of sleep, do body exercises, drink lots of water, and take vitamins.

“For me kasi, all of this is really needed for you to have the perfect skin that you want to have. But beauty comes from within. So, siyempre, the less stress, the better. And also, you have to give yourself a lot of sleep and also make an effort to exercise, to drink a lot of water,” she said.

She added: “Para sa akin, [being] healthy is beautiful and you really have to take care of yourself and drink a lot of vitamins. And also, for me to be able to sleep, I usually take melatonin to do that.”