Selena Gomez learns how to cook the Filipino favorite adobo. 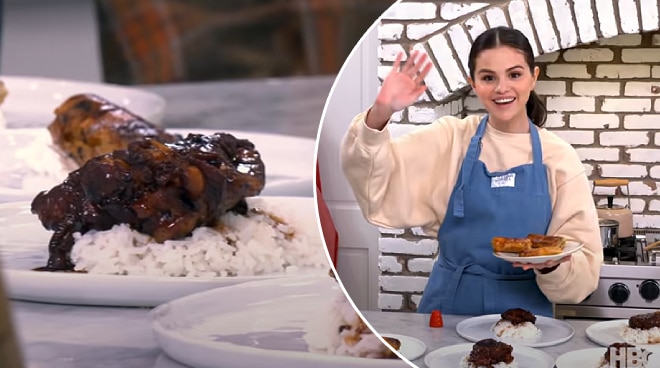 American singer-actress and now TV host Selena Gomez is set to feature the Filipino dish adobo in the second season of her show called Selena + Chef.

The Filipino favorite adobo is about to take over the international spotlight as it will be featured in the HBO Max show which sees Selena getting “schooled by the best chefs.”

With the help of Filipino-American celebrity chef Jordan Andino, Selena was able to cook adobo. Later on, it was judged by Jordan’s grandmother via video call.

In the trailer, Selena asked Jordan’s grandmother, saying: “How do you think it looks?"

To which the Fil-Am chef’s grandmother casually responded with: “It's okay.” This prompted Selena and the crew inside her kitchen to burst into laughter.

But Jordan — who is known for his "Filipino taqueria" in New York called Flip Sigi — reassured Selena that she did well and said: “That was incredible."

Other chefs who will be featured in the second season of Selena’s show include Aarti Sequeira, Curtis Stone, Evan Funke, Graham Elliott, JJ Johnson, José Andres, and Kelis Rogers.

The first season of the show first aired on HBO Max last August 2020.

Selena Gomez became widely known as an actress through her role as Alex Russo in the hit Disney Channel television series Wizards of Waverly Place.

Selena — whose hits include “Hands To Myself” and “Kill Em With Kindness” — last came to the Philippines in 2015 for the Manila leg of her Revival Tour.