Animal welfare advocate and pet lover Heart Evangelista shares the story of how her aspin Che Che almost ran away. 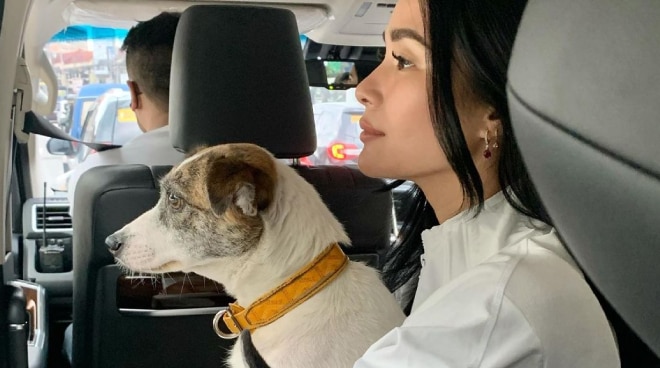 Animal lover and Philippine Animal Welfare Society (PAWS) ambassador Heart Evangelista-Escudero had an unexpected experience when her pet aspin Che Che ran out of her car while they were in Quezon city last January 13.

Heart, who is known to have many rescued cats and dogs, is fur-mom to her aspins Panda and Che Che on whom she posts regular updates on Panda’s Instagram account which has almost 53k followers already.

To the guards , driver ,my hairstylist ,all my friends and sister Camille (in high heels din) thank you sa pag habol din. What a scene .thank you lord ok lahat

To the man who opened his car door to stop cheche thank YOU! Sana wala naka video dahil mukha among tanga - naka kulot at high heels making pigil the trucks and cars and running after cheche . What an afternoon .

The 35-year-old actress and PAWS advocate also took time to thank a helpful stranger who helped her catch Che Che.

On her Twitter account she wrote, “To the man who opened his car door to stop cheche thank you! Sana wala naka video dahil mukha kong tanga naka kulot at high heels making pigil the trucks and cars and running after cheche. What an afternoon.”

In 2018, Heart launched the Have A Heart For Aspins campaign for PAWS which is part of her continued commitment to champion the welfare of aspins and other animals.

“I think that Aspins appreciate the love that you show them. They are so hungry for affection that once they get it they become very loyal to you,” Heart shared in a previous interview with PAWS.