Actress Barbie Imperial was treated to a sweet surprise by her boyfriend, actor Diego Loyzaga. 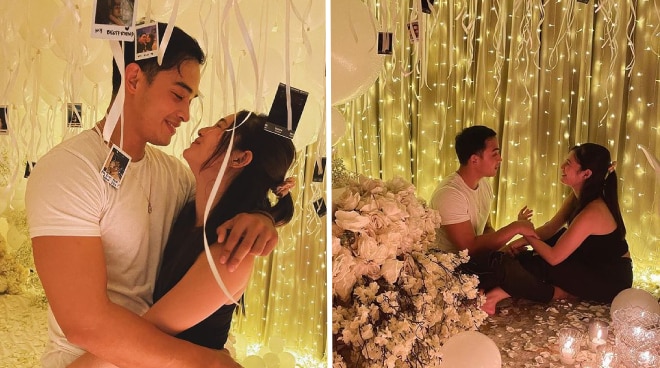 Actress Barbie Imperial was treated to a sweet surprise by her boyfriend, actor Diego Loyzaga.

On Instagram on Wednesday, January 13, Barbie shared photos of the romantic setup Diego had organized for her with the help of event stylist Gideon Hermosa.

"Came home to this. Grabe naman," she said in her post.

"Thank you," she then told Diego. "Grabe ka talaga. You’re the best. Thank you, my love."

It was early this year when Barbie and Diego confirmed their romance via a social media post.

For his part, Diego posted a photo of himself with Barbie on New Year's Day and thanked the actress for "making the end of my 2020 memorable."

Barbie, on the other hand, said she didn't expect to fall in love with Diego.

Sharing a photo of herself with the actor taken during their date at a museum in Rizal, the actress wrote: "Still my favorite photo of us.

"Totally unexpected to fall for someone I thought I’d be just friends with forever but I’m really happy to have found both love & friendship with this one. Thank you for making me happy & feel loved. Thank you for everything that you do to make me feel the love I deserve. So thankful for you, thank God for you," she added.

The two first sparked rumors of a romance in November, when Diego left a comment on Barbie's bikini photo on Instagram.