Jinkee Pacquiao, the wife of boxing champ and senator Manny Pacquiao, spent some quality time with her family for her special day. 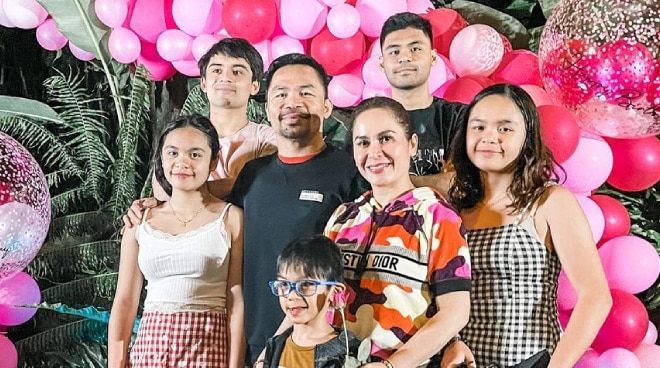 Based on her recent Instagram posts, the wife of boxing champ and senator Manny Pacquiao spent some quality time with her family at The Farm in San Benito, Batangas for her special day.

One of the photos she shared shows Jinkee with her husband and their children.

"My heart is still smiling. Thank You Lord for everything!" she wrote in the caption.

Another photo shows the bouquet of white and red roses she received from Manny on her birthday.

On his Instagram page, Manny, who just recently turned 42 himself, shared his short but sweet birthday message for his wife.

Sharing photos of them together, he wrote: "I wish I could put into words how much you mean to me! Thank you for being an amazing wife and mother to our kids. Happy Birthday babe!"

Last September, Manny and Jinkee marked their 21st wedding anniversary as a couple.

The two have been married since they were 19.

They have five children together—Jimuel, who is a model and aspiring boxer; Michael, an aspiring rapper; Mary Divine, a vlogger, Queen Elizabeth; and Israel.