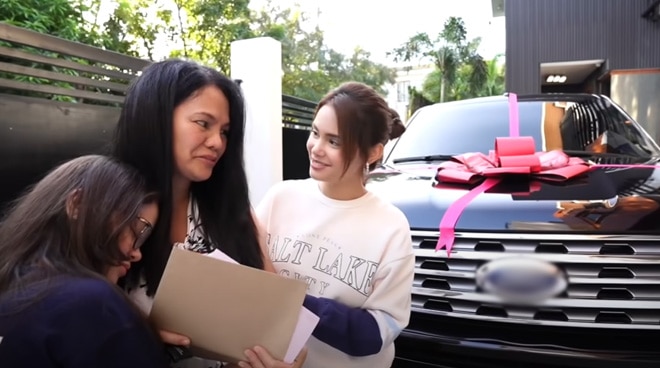 Ivana Alawi’s mom turned emotional as the actress gifted her with a brand new car.

According to the 24-year-old actress, she promised that she would buy her mom and her siblings their own cars first before buying one for herself.

Admitting that she felt a sense of guilt over what they did, she said: “Nakokonsensya ako kasi 2021 na. Stressed ang mama ko talaga sa akin sa gagawin namin ngayon.”

Ivana’s mom sat down with the vlogger-actress who thought that she would only be appearing for content for her daughter’s YouTube channel. Unknown to “Mama Alawi,” it was a well-orchestrated prank.

But the “real-talk” vlog which was supposed to feature heart-to-heart conversations between Ivana, her brother Hashim, and her mother Fatima started going downhill when the two siblings made a heated exchange in front of their mom.

It all started when Ivana’s brother suddenly stepped out of the frame to get snacks as soon as the cameras started rolling. An “irritated” Ivana then tells her mom how annoyed she is with her brother’s move.

Mona, the youngest among the three siblings, then started asking questions that further escalated the situation between Ivana and Hashim — prompting the only male among the siblings to walk away.

Read: Ivana Alawi, Liza Soberano among this year's 'The 100 Most Beautiful Faces' according to TC Candler

Her mom then followed Hashim outside only to find a car in the parking area of their house. Tears then flowed after “Mama Alawi” saw her surprise.

“I love you all. Thank you so much. Kayo lang sapat na. Hindi na dapat kayo nag-abala.