‘BLACKPINK: Light Up The Sky’ goes behind the scenes of BLACKPINK’s rise to global stardom

The BLACKPINK documentary will premiere on October 14 on Netflix. 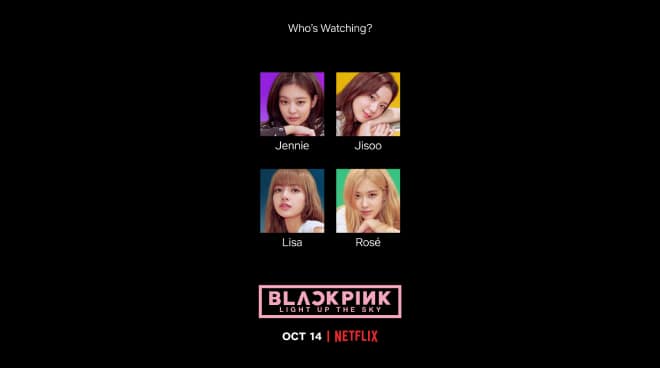 A BLACKPINK documentary is coming your way.

Netflix announced that BLACKPINK: Light Up the Sky, which is "an all-access documentary about one of the world's most popular groups," will premiere on October 14 on the video streaming platform.

BLACKPINK: Light Up the Sky — an all-access documentary about one of the world's most popular groups — premieres in your area on October 14!

Oh and that’s not all ... on October 14, these music icons will also become Netflix profile icons pic.twitter.com/b9t00VnEMO

The media giant also added that the members of the K-Pop girl group will become Netflix profile icons on that day.

BLACKPINK and BLINK Our 4 year anniversary We love you 🖤💕

Composed of Jisoo, Jennie, Rosé, and Lisa, BLACKPINK debuted in August 2016 under YG Entertainment. Some of their hit songs include "Boombayah," "Kill This Love," and "Ddu-Du Ddu-Du," among others.

Directed by Caroline Suh, BLACKPINK: Light Up the Sky will feature exclusive interviews and never-before-seen footage of the girls from being trainees to global superstars. Blinks will also get to see how the group recorded their follow up album, which also shows the highs and lows of being a K-pop idol group.

The documentary will also feature BLACKPINK’s historic 2019 Coachella appearance, which made them the first K-pop girl group to perform at the highly-anticipated music event.

“We can’t wait to share our personal stories with Blinks all over the world through Netflix!” said BLACKPINK. “We hope this film will bring joy and light to the viewers, and they will enjoy seeing our journey together on screen from the past four years.”

The group recently released their latest single "Ice Cream" off their upcoming album last August 28 which debuted at No. 13 on the Billboard Hot 100. The group collaborated with American pop star Selena Gomez for the song.

The music video for "Ice Cream" has already amassed more than 200 million views as of this writing.