A fan went to the Hollywood Walk of Fame to honor Lloyd Cadena. 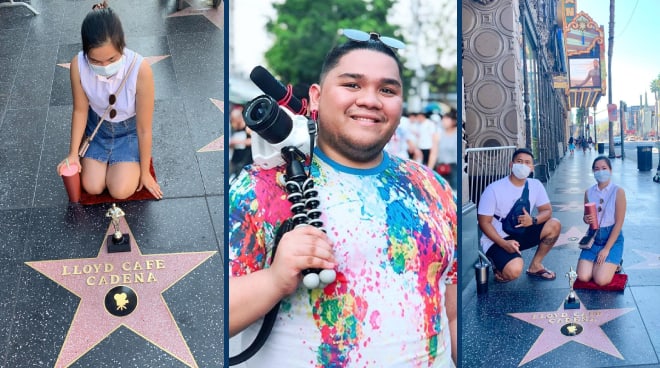 A US-based Pinay fan of Lloyd Cadena traveled all the way to Hollywood to pay tribute to the late vlogger whom she described as her “mental health savior.”

In a Facebook post currently making rounds online, Rica Mae Tianson Domingo — one of Lloyd Cadena’s avid fans — shared how one of the pioneers of vlogging in the Philippines helped her cope with her struggles in life.

“Paying tribute to one of my mental health saviors. Lloyd has played a very big part in helping me cope up with my daily struggles. His loudness, being genuine, and his humanitarian acts inspired me to watch his vlogs whenever he uploads a new one,” she wrote.

She continued: “Together with his LC Creations Team, the Bnt production Bakla Ng Taon, Madam Ely, Madam Aivan, his mom Mother kween page, and Erika Embang, their vlogs keep me in moving forward as watching videos is one of my ways to heal. I have been eager to meet you in person whenever I get back to PH. But then, it was too late.”

As a way of honoring Lloyd, Rica went to Hollywood to give him a star at the stellar “Walk of Fame” in Los Angeles.

“We traveled all the way to Hollywood LA because Lloyd deserves a star in the walk of fame as he has helped A LOT!!! virtually and physically,” she stated.

Rica ended her post with words expressing her gratitude for inspiring thousands of people through his vlogs.

“Wherever you are right now, I hope that you still continue to push for your dreams and guide those who look up on you, your love ones, and the rest of  your family. Rest well and I salute you for everything that you have done. Thank you very much Lloyd Cafe Cadena,” her post read.

Ivana Alawi, for one, took on the challenge she and Lloyd were supposed to do together.

Just recently, one of Lloyd’s closest friends and fellow vlogger — Michelle Dy — shared some of her most favorite moments with Lloyd through a vlog.

According to his family, Lloyd died of a fatal heart attack due to COVID-19.