Here are the celebs who took legal action against their bashers and fake news purveyors. 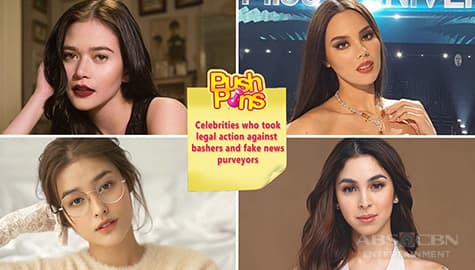 In September 2020, actress Liza Soberano received a rape remark from a netizen who was allegedly a former employee of her previous internet service provider.

The Kapamilya actress didn’t let it pass and formally filed a complaint against the netizen.

According to Liza, rape jokes like this shouldn’t be taken lightly, and while “everybody is entitled to their own opinion...at some point, you have to be respectful to others online.”

Julia and her mother, Marjorie Barretto, were quick to respond to the said allegation, saying that it is false. Julia even posted a photo on Instagram showing off her flat tummy with the caption, “FAKE NEWS :)”

On September 23, Jay retracted his earlier claims. However, Julia is determined to file a case against the former broadcaster because she wants the latter to be held accountable for the distress that the baseless claim caused her family.

The Kapamilya actress appeared before the NBI Cybercrime Division on September 25, asking the agency to investigate the “untrue and irresponsible statements" made by Jay on his social media account.

Last July, a fake nude photo of Miss Universe 2018 Catriona Gray made rounds online. The said photo shows Catriona in a bathtub with parts of her chest exposed.

Catriona wasn’t taking any of it and appeared at the office of the National Bureau of Investigation (NBI) in Manila to file a complaint against the person behind her fake topless photo.

Prior to this, Catriona’s legal counsel Atty. Joji Alonso released a statement condemning the act and said that the viral topless photo of the beauty queen is fake and digitally altered.

On July 9, a man went to Bela Padilla’s condo building and claimed to be her former classmate and boyfriend. Since the security supervisor of Bela’s condo was informed that the actress was not expecting any visitors that day, he requested for the man to provide identification and it was discovered that he had two other male companions in his car. The man was not exhibiting any reckless or drunken behavior but it can be deduced that he was a fan of Bela based on the photo he provided.

Fearing for her own safety, Kapamilya actress filed a complaint against the man. Bela personally went to the Mandaluyong city police station on July 13 to file a formal case of unjust vexation.

In the July 13 report of TV Patrol, Bela also shared that this was not the first time she has had a stalker. Two years ago, she revealed that she received mysterious packages like a book inserted with dead insects.

Learn more about these news in this video:

Do you believe celebrities should indeed fight back in these situations?