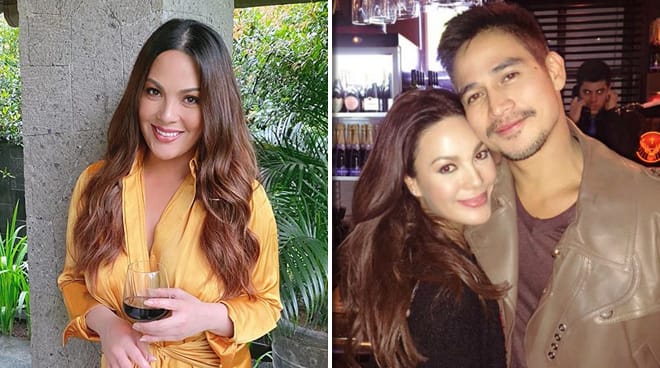 “The relationship is very real for me.”

“Why am I talking about it? Because it was part of my life and in this kind of conversation, people help me to know me more. Of course part naman talaga ng buhay ko ‘yun,” ani KC.

“There was a time he visited me on set while I was doing a movie with Chard [Richard Gutierrez] and nakakatawa,” ani KC.

“And then he’s there lang, waiting lang and wala naman siya pakiaalam (that time) kasi hindi naman niya movie ‘yun he’s a gentleman, he’s so respectful so he just stayed outside.”

“That was very real for me and that was my first announced relationship.”

“And I was a host on that show, and when he got to that show, he’s going to promote his music album. So nagulat ako noong tinanong siya ‘na is it true na may inspirasyon ka na?’ Sobrang sweet pa ng pagkakasabi niya, kasi na parang I was stunned and I didn’t realize that we were still trying.

“To be honest behind the scenes, we already together and we did not stay together and then suddenly he announced that we were together. So at that time when he asked, he wanted to really try so that’s why tulala talaga ako and he hugged me and nagkayakapan na lang kami so I was ‘okay were trying,’” pagdidetalye ni KC.

“It was very real for me. PJ is a wonderful guy until today,” lahad ni KC.

“May pinagsamahan kami. He was like 10 years older than me but you know, he started out like a kuya to me. So I know exactly what people loved about him and people know naman na that’s very real for me and I was so young and naive.”

“No one is saying that we were not together anymore. And there was all endorsements lined up kasi noong time na ‘yun and I didn’t know how else to kind a these brands to know na it’s very hard for me because I can’t pretend. That I cannot act on set. I cannot act we’re together to sell something and to be connected.”

“More than the interview, more on the personal level. You just regret that it had to end. But I had to say that we were not together anymore because it was hard nga for me already with something with the endorsement,” sabi pa ni KC.

“I just want to be honest and share my life in a way as authentic as possible,”

“I regret that we have to end. I think that in any relationship you really have faith in it right? And you go into it not thinking that you wanna end it. You go thinking that, you want it.”