Kit Harington and Rose Leslie, who played star-crossed lovers Jon Snow and Ygritte on ‘Game of Thrones,’ are expecting their first child. 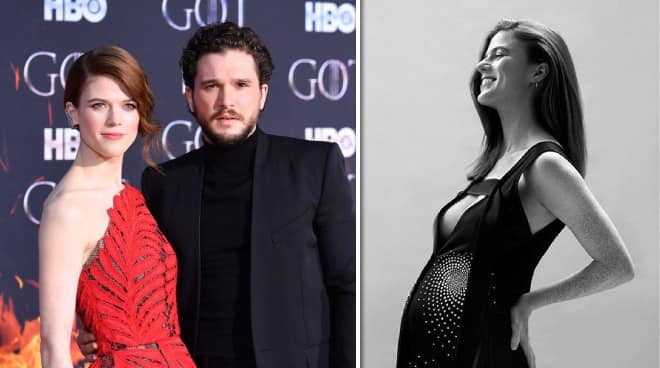 Photo Credit to Cosmopolitan and @ursula_lakeInstagram

Kit Harington and Rose Leslie, who played star-crossed lovers Jon Snow and Ygritte on Game of Thrones, are expecting their first child.

Rose made the announcement by appearing in the September issue of U.K.'s Make Magazine. The 33-year-old actress was seen flaunting her growing baby bump in a black, floor-length silk dress, in the images taken by Billie Scheepers.

So wonderful working with the beautiful Rose Leslie for the cover story of @make_magazineuk out now! A very special all woman team photographic shoot capturing Rose at this wonderful time as she prepares for motherhood for the first time! My team were: @billiescheepersphotography @liztaw doing beautiful hair and @justinejenkins wonderful makeup. Rose wears @stellamccartney. Huge thanks to @vrwpublicity for organising the shoot and to Hannah Rand for her interview. #roseleslie #makemagazine #rose #portraitphotography #portrait #interview #covershoot #cover #stellamccartney

New cover story for @make_magazineuk with the wonderful Rose Leslie, looking amazing in a grey oversized @stellamccartney trouser suit. Huge thanks to my brilliant, all girl team for these beautiful images: photographer @billiescheepersphotography, hair by @liztaw and makeup by @justinejenkins. Interview by @hancathrand. Huge thanks also to @vrwpublicity and @onerepresents for their help. It was very special to work with Rose at this special time in her life. #roseleslie #makemagazine #rose #portraitphotography #portrait #interview #covershoot #cover #stellamccartney

Rose and Kit first became the subject of dating rumors in 2012.

After a brief split, the two reconnected and continued to fuel romance rumors until they officially confirmed being a couple in April 2016.

Rose and Kit got engaged in September 2017, and eventually tied the knot in Scotland in June 2018.

Speaking with Make Magazine, Rose shared how she and Kit are settling into their new home in East Anglia in England.

“What a glorious thing to be able to run to the countryside and recoup. It’s a great privilege to be surrounded by greenery, birdsong and hedgerows, and our delightful neighbors. It’s so peaceful,” the mom-to-be said.

She jokingly described their Tudor manor house as "the house that Jon Snow built."

“It’s incredibly old. We have a thatched roof, which currently has an enormous hornet’s nest in it. I do love to think about the house and all the people who have lived there. Were they happy, how did they live? All the families passing under those ancient beams,” Rose added.

Check out the full feature here.