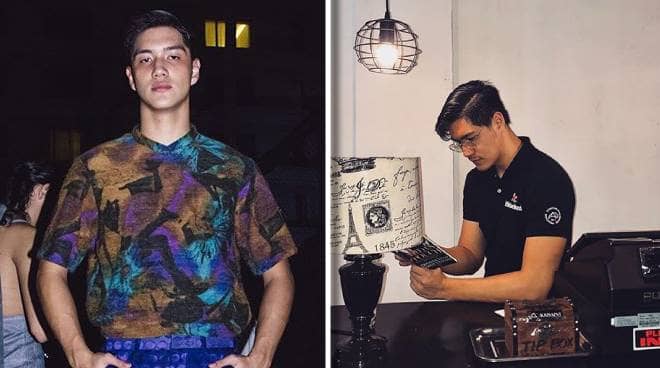 Despite the uncertainties brought by the COVID-19 pandemic, Jericho Rosales' son Santino is thankful that he is still able to run the restaurant he co-owns with his mother Kai Palomares.

Santino has been spending time managing the restaurant Kaisaint in Parañaque City. According to the model, they had to make adjustments to adapt to the new normal.

"We were forced to adapt to the situation and were blessed enough that the government allowed us to operate. We then shifted to pushing for takeout and deliveries which we still do now," Santino said in an interview with ABS-CBN News.

"Now we are able to take in dine-in as well, but by reservation," he added.

Story time! It’s always been a big dream of mine to start a business early in life. Today, I am proud to say that I took the leap and started my first business venture with my mum @kai_pal. Everyday, I think of how blessed I am to be able to have the opportunity to do this in my last year of being a teenager and to live the life I have. The past few weeks for me have been full of emotions and revelations. I truly am grateful for everything. We weren’t able to push through with the original scheme of the business, nor were we able to finish some renovations due to the outbreak of the virus, so we remodelled it temporarily and we are operating as a takeout and delivery restaurant. Moving forward, it makes me really proud to say to say that we are now open and ready to serve you🤗 @thekaisaint is located at 72 Dona Soledad, Parañaque City. We’re open from 10am-6pm Tuesdays-Sundays:) ps. I started reading again!🤘🏻

Santino relayed that they chose to venture into the food industry because he and his mom love food.

"And throughout the years, my mom has been in the food and hospitality business... So it seemed like an endeavor that was very favorable [for us]." he shared.

Aside from being an entrepreneur, Santino is also working on his modeling career. He recently signed a management contract with Viva.

He remarked that he wants to make a name for himself and pursue a career path different from his dad.

"It's really just about showing people that I am my own person, I have my own things that I am very passionate about. My career path will also develop very differently from his as I would like to focus on building businesses and modeling. I aim to show people that I am not an extension of someone else," he said.