Charo Santos is a big fan of ‘Crash Landing on You.’ 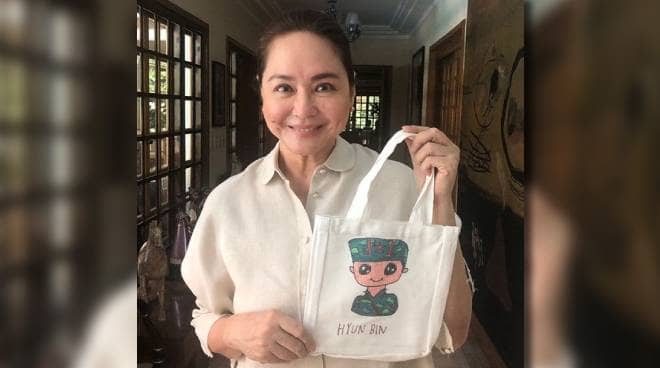 Just in time for the birthday of South Korean actor Hyun Bin, ABS-CBN executive and self-confessed fan Charo Santos shared her personalized eco bag with Hyun Bin's cartoon image painted on it to her social media followers on Friday, September 25.

Charo shared that her granddaughter made the personalized bag.

"Thank you to my very talented apo, Julia for this personalized Captain Ri ecobag :) She made it herself!!! So proud of you, Julia @conciosisters," she posted.

Happiest Birthday to #HyunBin :) This ecobag would’ve been a nice bday present right? Ha ha ha Thank you to my very talented apo, Julia for this personalized Captain Ri ecobag :) She made it herself!!! So proud of you, Julia @conciosisters ❤️❤️❤️

In an interview last March, Charo relayed that she is a fan of Crash Landing on You. Hyun Bin played the role of Captain Ri in the series.

“Siguro dahil nag-fit 'yung actors din doon sa characters, hindi mo na mahihiwalay kung sino si Hyun Bin from Captain Ri, and from sino si Yoon Se-ri from [Son Ye-jin]. Parang it’s a fairytale. Some things sequences may not be realistic but I did not mind. I dove into the fantasy of two star-crossed lovers na a modern-day Romeo and Juliet,” she shared on why she became a supporter of the show.

Charo added, "Sumakay na ako talaga and I would swoon they would have this encounter tapos hindi mo alam kung matutuloy ba sila or hindi. Tapos 'yung mga kissing scenes nila were very well calibrated. They gave you just enough so you end up wanting for more and then you’re rooting na for them."

Crash Landing on You premiered in South Korea in December 2019.