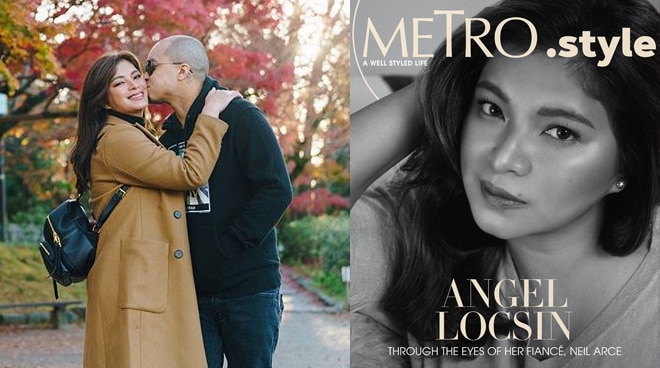 Metro.Style unveiled on its social media pages on Monday, September 21, its cover featuring the actress and philanthropist, "as seen through the eyes of Neil," who in the exclusive feature described Angel as "the sweetest hero you'll ever meet."

In this exclusive, we see Angel Locsin (@therealangellocsin) through the eyes of her fiancé, Neil Arce (@neil_arce). "She's the sweetest hero you'll ever meet," he says. Taking a break from their slow and safe return to the daily grind, they also talked to us about their wedding plans, their relationship dynamics, their lives under quarantine, and their Kapamilya Channel show "Iba ‘Yan!" LINK IN BIO ⁣ ⁣ #MetroStyleXAngelLocsin⁣ #MetroLovesAngelLocsin⁣ #AngelLocsin⁣ ⁣ Photography by @neil_arce⁣ Creative direction by @iamkatrinacruz and @raffcol⁣ Makeup by @mikebawa⁣ Hairstyling by @jayweehair⁣ Styling by @cathsobrevega and @ririverano⁣ Text by @gracelibero⁣ Special thanks to @patriciaco @ajmcand

Angel and Neil are engaged to be married, and they opened up to Metro.Style about their "wedding plans, their relationship dynamics, and their lives under quarantine."

According to the couple, they were supposed to tie the knot this November, but decided to postpone the wedding to "early next year."

"But of course, it depends on the situation with the pandemic,” Neil told the magazine.

“We were thinking, ‘Should we do it small?’ But that’s not us eh," he said. "We’re friends, we have a group of friends. We want everyone to be there. We want everyone to have fun. And you know, Angel didn’t attend their prom. She didn’t have a debut. So this is the only big party she’s going to have."

Angel, for her part, admitted it's Neil who's more hands-on with the wedding preparations.

You can check out the full feature here.

The two got engaged in June 2019 after being a couple for more than a year. They first revealed their relationship back in February 2018.