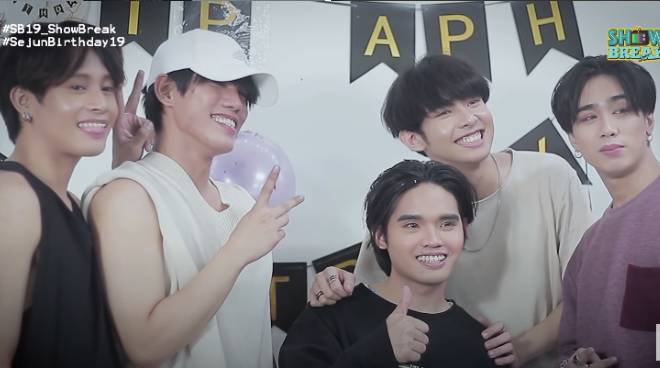 The boys of SB19 threw a surprise for the group’s “Pinuno” Sejun on his special day.

In the latest episode of the P-Pop group’s show on YouTube called Show Break, SB19 members Stell, Ken, Justin, and Josh documented the preparations they organized for their Pinuno on his birthday.

While Sejun was on-air for his solo Voice Live, the four members of the group — led by ‘bunso’ Justin — decorated the room with lights, balloons, and a banner on the wall.

As soon as Sejun bid goodbye to his fans on his Voice Live, Stell, Ken Justin, and Josh entered the room and gave him a cake.

Finally, the boys unveiled the biggest surprise of the day — a large box with Stell inside who danced around Sejun as soon as he came out of it. “Ang saya ng araw na ‘to,” Sejun quipped.

At the end of the video, Sejun thanked everyone who made his day extra special.

He added: “I’m very, very thankful to all these wonderful people behind the camera.”

One of the most celebrated groups in OPM today, SB19 achieved various feats on the Billboard charts including spots on the Social 50 and Emerging Artists charts.