Spirits Cast: Where Are They Now? | Push Pins 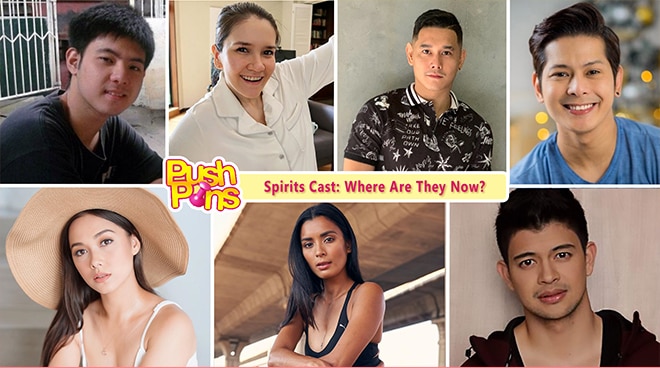 In 2004, the fantasy teen-oriented TV drama ‘Spirits’ was born. It involved psychic abilities, elementals, and aliens, among others. It also starred some of this generation’s household names. Today, let’s take a trip down memory lane as we recall the cast and find out where they are now.

One of the most sought-after actresses of today, Maja’s last TV drama project was the top-rated ‘The Killer Bride’ where she played the iconic character of Camila Dela Torre. Aside from acting, she also keeps herself busy by vlogging and has her own YouTube channel called “Meet Maja.” She is currently in a relationship with her businessman boyfriend Rambo Nuñez.

Rayver Cruz has long been with the Kapamilya network before he decided to take the big leap to another one in 2018. His last project with ABS-CBN was another fantasy series—the former primetime hit ‘Bagani.’ Today, Rayver continues to thrive as an actor, host, and performer.

A very popular child star of her generation, ‘Spirits’ was the last TV series for Serena Dalrymple who has done many iconic comedy films. After leaving the stardom, she chose to lead a private life and now resides in New York. Based on her social media page, Serena has become quite fond of cooking and hosts a food blog called “Clueless Cook.”

It has been quite a troublesome period for the award-winning former child star Jiro Manio. In the past years, Jiro has been entangled in drug-related issues. The last reports involving Jiro surfaced back in January when he was arrested for allegedly stabbing a man in Marikina. Prior to the incident, he was working as a helper in an eatery.

Former Star Circle questor Michelle’s last showbiz project was Pasion de Amor in 2016. Currently, she enjoys her life abroad as a female transformation coach. She is now married and has a daughter named Anika.

Also a discovery of Star Circle Quest, Joseph is now married to his non-showbiz wife Franchesca Tonson, and they have two kids together.

Mico Aytona continues to appear in several shows on TV to this day. Aside from acting, Mico also creates short videos that he posts on his YouTube channel and Instagram page. He is also now a super dad!

Know more about where they are now in this video:

Did you miss them?