Vhong Navarro also has a vast collection of timepieces, eyewear, and clothes. 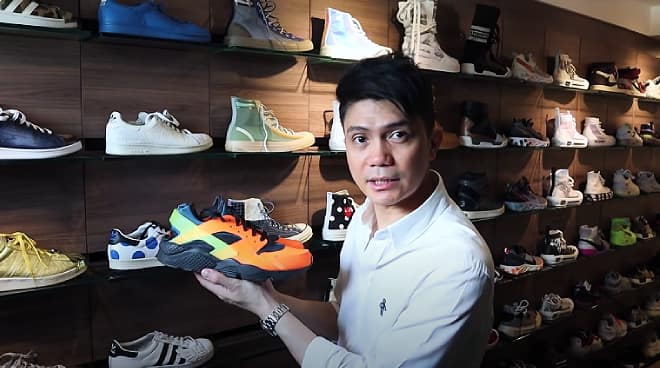 Vhong Navarro opened the doors to his humble abode and took his fans on a virtual tour of the corner of his house where he keeps some of his most valuable items.

According to Vhong, he decided to do a house tour upon the request of his fans whom he revealed have been asking him to show them around his home — particularly his two-floor walk-in closet where he stores his shoe collection.

Vhong showed off some of his rare pairs of shoes including the adorable Nickelodeon x Nike collection of SpongeBob Squarepants, Patrick Star, and Mr. Krabs design kicks. He also has a number of Disney and Nintendo shoes from a shoe brand he endorses.

Among some of the unique pairs of shoes, Vhong has personalized Nike shoes with designs based on his hit films Gagamboy, Mr. Suave, and Agent X44 inside his closet. He also had other shoes from luxury brands such as Alexander Wang, Dior, and Louis Vuitton.

Meanwhile, the 43-year-old actor also showed his fans his other collections which included timepieces, eyewear, and clothes.

The It’s Showtime host said he would continue the rest of his hour tour in his next vlog.