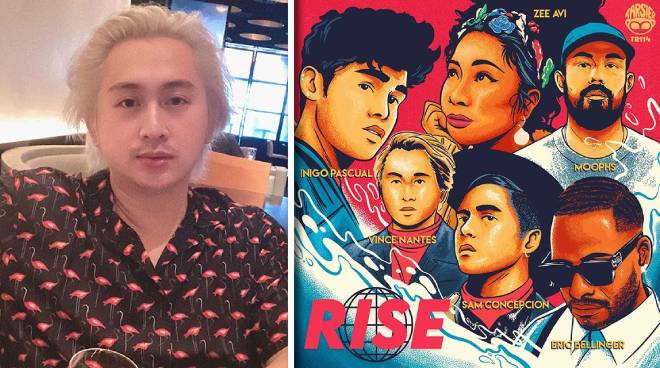 Since its launch in 2017, Tarsier Records, which is a division under Star Music, has continued to pursue its goal of taking Filipino music to a wider international audience. This year, they launch their biggest release with the single, “Rise” which is a collaboration of Asian talent including local artists Sam Concepcion and Inigo Pascual as well as other Asian artists like Grammy Award-winning R&B artist Eric Bellinger, Manila-based producer Moophs and Malaysian singer-songwriter Zee Avi. The songwriter behind “Rise” is just as impressive with US-based songwriter Vince Nantes, who is credited for composing South Korean boy band BTS’ hit single “Black Swan”, being the creative mind behind it.

According to Vince, he was inspired to write the song to help spread positivity in times of uncertainty. “From the pandemic to protests, to political differences, to unfair treatment to one another as human beings, it’s a lot for all of us to digest, and I wanted to give people something they can enjoy, emotionally connect to, and believe in,” he shared.

Rise’s song producer Moophs shared that the song aims to give listeners a multi-cultural example of coming together to rise above adversity. “This song is my answer to 2020. If we look past borders, politics, and skin color and resolve not to be divided, we can overcome anything this year throws at us. Doing a project this big and this important is definitely a dream come true for me. I think with the artists that we have from different parts of the world, and the unifying message it has, this song could be heard everywhere across the globe,” he said.

After being released online worldwide last September 18, two music videos for the song will become available for viewing, an animated video straight out of a comic book where the artists will be superheroes battling "the 2020 monster," and inspiring stories of humanity and messages of hope from influencers worldwide.

“RISE” is now available on several music streaming services alongside its lyric video, which can viewed through its record label Tarsier Records’ YouTube channel.