Check out how the mukbang challenge turned out when Alex Gonzaga and Mikee Morada decided to prank uncle Jojo. 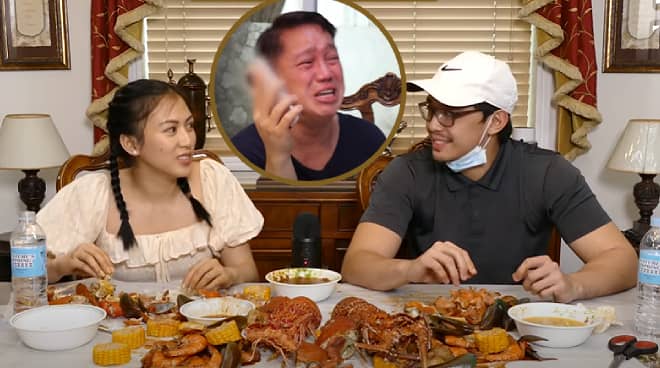 Alex Gonzaga, alongside her fiance Mikee Morada, pranked her uncle Jojo in her latest YouTube vlog.

Titled "Seafood Mukbang Prank," Alex and Mikee did a mukbang challenge and decided to prank uncle Jojo who was asking them questions during the challenge.

To prank uncle Jojo, the couple pretended that they were fighting in the middle of the vlog shoot. Mikee also pretended to walk out from the shoot.

Later on, Jojo became emotional because of what happened and the couple revealed then that it was just a prank.

This was the morning after Mikee proposed to me. For 2 days he ate breakfast alone or with Uncle because I was still asleep with my mom. But of course after nya magpropose ako pa gumising sa kanya para manggulo sa breakfast nya 😂😂 Happy birthday Mikee! Thank you for not demanding anything from me and yet you always give me what I want. Thank you for making me feel what it really is to be in a relationship! You will always be my first and by God’s grace last true LOVE 😘

The video has already amassed more than 3 million views as of this writing.