Sineskwela Cast: Where Are They Now? | Push Pins 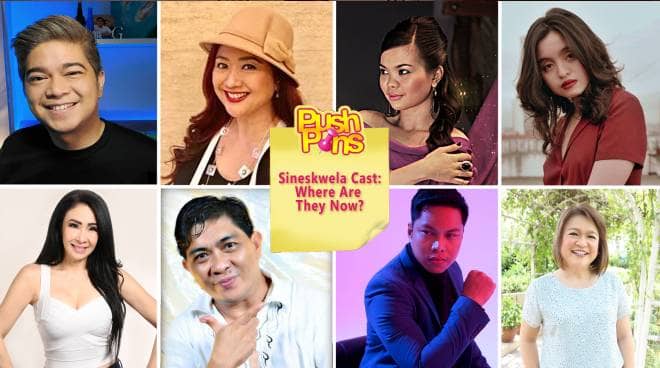 Every batang ‘90s will go back in time just hearing “Bawat bata’y may tanong,” the iconic line in the soundtrack of the youth educational show ‘Sineskwela.’ Today, let’s feel the nostalgia as we remember the original cast of the groundbreaking show and find out what they’re up to now.

Fondly called Ate Giselle in the show, Giselle Sanchez pursued her showbiz career after ‘Sineskwela.’ Over the years, she’s had hosting and acting stints as well as received singing projects. In 2019, she became part of It’s Showtime’s Tawag Ng Tanghalan: Celebrity Champions. Giselle remains active in the industry to this day.

Known as Ate Winnie back then, Winnie Cordero cemented her career as one of the industry’s sought-after broadcasters. She became a news anchor and host for several Kapamilya shows including Magandang Umaga Bayan, Umagang Kay Ganda, and TV Patrol.

Roobak Valle is the half-human, half-tree named Ugat Puno who we’ve all come to love. Although we didn’t see him much on-screen after the show, Roobak has been a resident director at Gantimpala Theater Foundation for over two decades. Among his notable works were Ibong Adarna, Noli Me Tangere, and Florante at Laura.

The leader of the group, Icko Gonzalez played Kuya Bok. After ‘Sineskwela,’ he became a visual arts director and taught theater for a decade before joining CBN Asia where he works as the head of Special Projects. Icko has since written and directed various shows for television.

Maan Musayac played the adorable Kulitsap in the show. Unlike the others, Maan chose a rather distant path from the industry and now works as a nurse in the United States.

Sheena Ramos played the half-human, half-fish Palikpik. After the show, Sheena pursued her studies and tried out many things in her career. On Instagram, Sheena shared she became a registered nurse, PR copywriter and accounts manager, social media strategist for a media network, digital channel/brand planner in a creative agency, and insuretech person. Sheena also continues to do acting stints and have done projects including Cinema One Originals’ ‘The Comeback.’

Christine Bersola-Babao played Anatom, the girl with extraordinary powers to transform into an atomic particle. She continued her career in the entertainment industry and had hosting stints for TV. In 2003, she tied the knot with broadcaster Julius Babao and they have two kids together. Over the years, Christine has been championing parenting and entrepreneurship with the goal to inspire “mompreneurs” out there.

Brenan Espartinez played Agatom, the male counterpart of Anatom. A skilled singer, Brenan pursued a career in music after the show. He eventually left the limelight, but later appeared again as a contender for It’s Showtime’s Tawag Ng Tanghalan: Celebrity Champions in 2019. Brenan continues to make music to this day and is the vocalist of the band Sub Projekt.

See where the cast is now in this video:

Who among the Sineskwela squad is your favorite?