Jennylyn Mercado reacts to netizen criticizing single moms: ‘Having a kid early doesn’t make you less of a woman’ 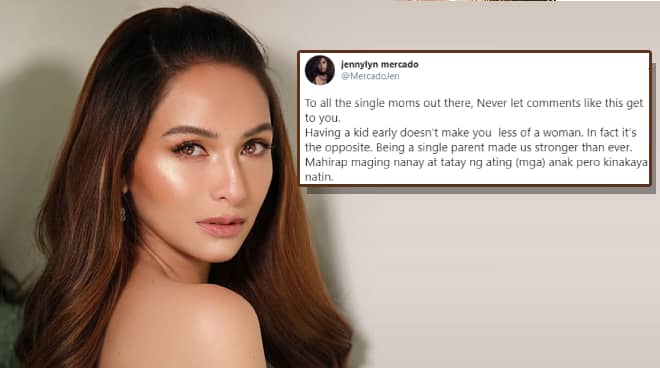 Jennylyn Mercado took to social media to write an empowering message for single mothers after a netizen posted a statement criticizing them.

On her Twitter page, Jennylyn said, "To all the single moms out there, never let comments like this get to you. Having a kid early doesn’t make you  less of a woman. In fact it’s the opposite. Being a single parent made us stronger than ever. Mahirap maging nanay at tatay ng ating (mga) anak pero kinakaya natin." 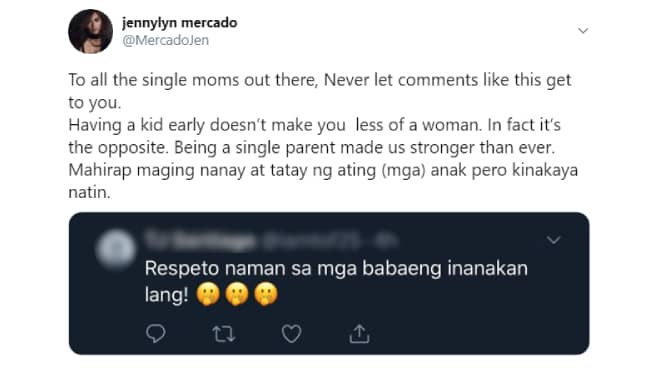 Jennylyn is a single mom herself. She has a son with ex-boyfriend Patrick Garcia named Alex Jazz whom she gave birth to in August 2008.

The actress remarked that single moms are strong women.

"And for those people na minamaliit pa rin kami hanggang ngayon, I feel so sorry for you. Lahat ng mga kritisismo sa pagkatao namin nasabi na samin, and yet here we are. Raising our kid(s) the best we can. Whatever you say, You can and will never bring a strong woman down," she stated.

Jennylyn added, "Kaya always hold your head up high. We are more powerful than they think we are."