Rico Blanco amused his fans and followers when he shared an old painting of his depicting an ostrich in the city. 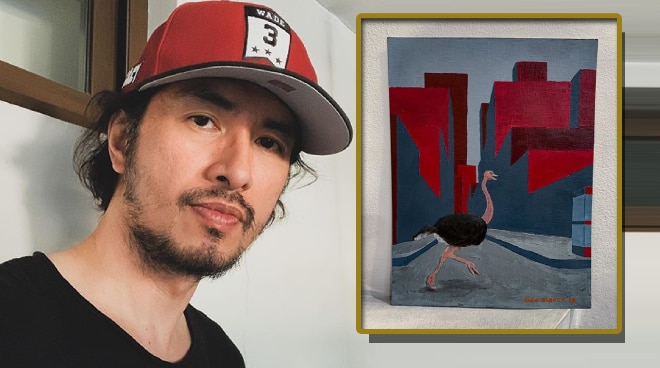 Rico Blanco amused his fans and followers when he shared an old painting of his depicting an ostrich in the city.

The musician shared his old artwork, which he painted back in 2005 or 15 years ago, on his social media pages on Wednesday, August 5, a day after a similar scene transpired in Quezon City.

when i painted this 15 years ago i was simply going for “surreal.” times have changed. . . . . #ricoblancoart

In his caption, Rico wrote: "When I painted this 15 years ago, I was simply going for 'surreal.'"

Rico's post drew mixed reactions, with most of the comments calling him "prophetic" and even branding him as "modern-day Nostradamus" after the French astrologer, physician, and reputed seer.

Even his fellow celebrities were amused. Both Maris Racal and Gretchen Ho wrote, "OH MY GOD," while Empoy Marquez gave him a thumbs up for his "nice art."

Rico's painting is the latest among the viral entries spurred by a video of an ostrich running loose inside a gated subdivision in Quezon City.

The bizarre scene—which reminded many of the 1995 adventure film Jumanji, where wild animals are magically transported to the city—has generated memes and even political commentary on social media.

Ride-hailing service Angkas offered the promo code "OSTRICH" after one of its riders was spotted in the viral video. Meanwhile, gaming store Filbar's used a picture of the ostrich to advertise its Jumanji merchandise.

On microblogging site Twitter, "#Oustrich", ranked among the top trends in the Philippines after it became the latest popular pun among critics of the administration.

Yes, I have something to promote. Please check out our event on Aug 10, as we talk about our reflections on decolonizing aid, human rights, peace, and health!https://t.co/6WEAvyCM3P

The damn ostrich turned around when told she didn't have a gate pass. Already 1000% times better than most politicians. https://t.co/CHEsgVS4Mt

As it turns out, the wild animal caught in the video is being kept by one of the residents in the subdivision. It has since been brought back to a "fenced property," an official told ABS-CBN News.