After 30 years, Ted Failon is saying goodbye to ABS-CBN

Read the full statement of ABS-CBN on Ted Failon's departure. 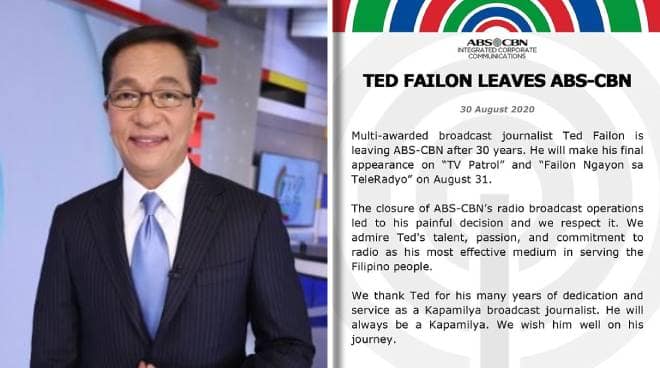 After 30 years, Ted Failon and ABS-CBN will be parting ways.

On Sunday, August 30, ABS-CBN released a statement regarding Ted's departure from the network.

Below is ABS-CBN's full statement:

“Multi-awarded broadcast journalist Ted Failon is leaving ABS-CBN after 30 years. He will make his final appearance on TV Patrol and Failon Ngayon sa TeleRadyo on August 31.

“The closure of ABS-CBN’s radio broadcast operations led to his painful decision and we respect it. We admire Ted's talent, passion, and commitment to radio as his most effective medium in serving the Filipino people.

“We thank Ted for his many years of dedication and service as a Kapamilya broadcast journalist. He will always be a Kapamilya. We wish him well on his journey.”