WATCH: Pinay teen gets four-chair turn for her rendition of ‘Never Enough’ on ‘The Voice Kids UK’

The judges of the show gave Justine Afante a well-deserved standing ovation. 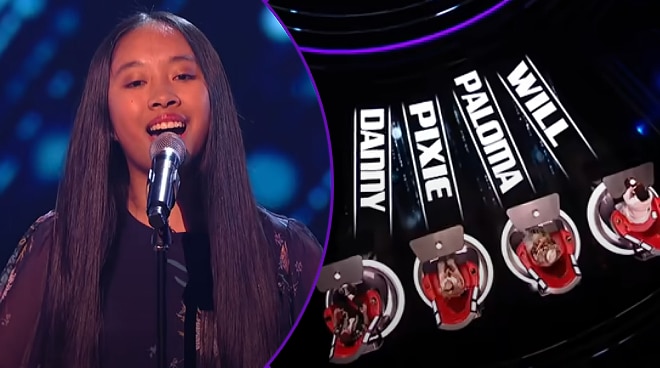 Justine Afante — a 13-year-old Pinay based in Swansea, Wales — is the latest Filipino to get a four-chair turn on The Voice Kids UK.

Performing “Never Enough” from the movie The Greatest Showman, Justine gave both the host and the judges of the show goosebumps for her rendition of the song originally sung by Loren Allred.

At the end of her performance, judges Danny Jones, Pixie Lott, and Paloma Faith gave Justine a well-deserved standing ovation.

Justine isn’t the first Filipino to get a four-chair turn for this season of The Voice Kids UK. Joshua Regala, a 15-year-old Filipino singer who hails from the town of Navan in County Meath, Ireland, also got all four judges of the show to turn for him. Both John and Justine are part of Coach Pixie Lott’s team.

So far, four Filipinos are now heading to the Battle Rounds of the hit UK reality singing competition.

Victoria Alsina, who sang “How Far I’ll Go” became part of Team will.i.am during the first week of the blind auditions.

Meanwhile, Jarren Garcia — who performed Billy Joel’s “Just The Way You Are” — joined the team of Danny Jones.

The Voice Teens in the Philippines, on the other hand, continues to air via Kapamilya Channel every Saturdays and Sundays.

The coaches for this season are Apl.de.ap, Lea Salonga, Sarah Geronimo, and Bamboo while Luis Manzano and Alex Gonzaga serve as hosts of the show.