WATCH: Richard Gomez shows how to harvest, extract honey in his backyard in Ormoc

Richard Gomez has a mini bee farm in his own backyard in Ormoc. 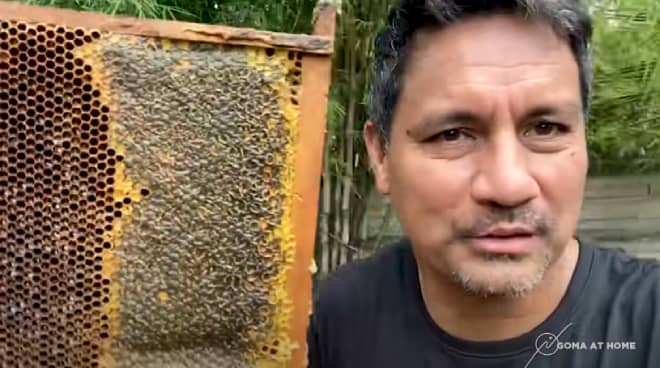 While Richard Gomez has been busy serving the people of Ormoc throughout the quarantine, the actor-politician has also devoted some time for his at-home vlogs where he tries to showcase his talent for cooking through farm-to-table meals and unique recipes.

READ: Richard Gomez makes a delicious meal from vegetables harvested from his garden

For his latest Goma At Home vlog, Richard showed his followers how to harvest and extract the honey from his mini bee farm in his home backyard in Ormoc with the help of his beekeeper named Gerhard.

Getting some sun today at 1200 ft above sea level in Ormoc.

Goma showed — through his beekeeper — how to use a centrifugal extractor. Then, he also highlighted the importance of using a honey refractometer which he said is important to know if the honey is pure or not.

After the entire process of harvesting all the way packaging, he used the honey as a spread for the bagels his daughter Juliana made herself.

So many beautiful sunsets, high up near the sky.

“You’ll see it na once it’s finished, it has stickers on it. Lucy made all of this,” he said, referring to the bottled packaging of the honey which he and his wife place in a box designed by Lucy as well. They then share the bottled honey to some of their friends as gifts with locally made soaps in it.

Just recently, Richard also showed off the rambutan he harvested from his backyard as well.

Today’s rambutan harvest from our backyard.

Richard Gomez currently resides in Ormoc City in where he serves as Mayor.