Diego Loyzaga is returning to the big screen two years after his last movie project, the comedy film “Petmalu.” 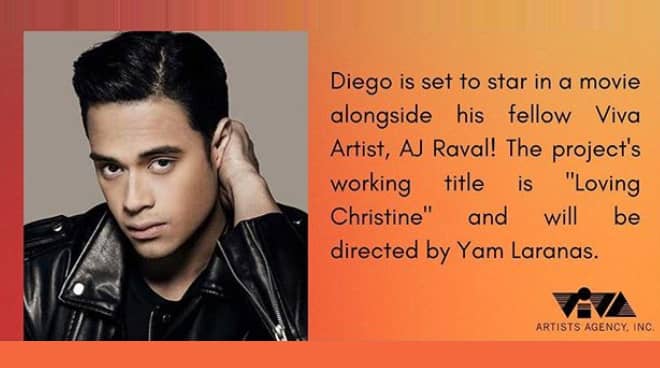 Diego Loyzaga is returning to the big screen two years after his last movie project, the comedy film "Petmalu."

On Friday, August 18, Viva Artists Agency, his new talent agency, announced that the actor will star in a new movie opposite his fellow Viva artist, AJ Raval.

@diegoloyzaga is set to do his first project under his new management, Viva Artists Agency! The actor is set to star in a movie alongside his fellow Viva Artist, @ajravsss. The project's working title is "Loving Christine" and will be directed by @yamlaranas. Who is excited to see this pair? 💕

The project's working title, it said, is "Loving Christine." It will be directed by Yam Laranas, who is known for his movies "Aurora," "The Road," "The Echo," and "Abomination."

The movie is Diego's first acting project after ending his showbiz hiatus this month.

He was recently introduced as the newest contract artist of Viva Artists Agency. In an online press conference, Diego said fans can expect more projects from him.

“I’m ready to accept sexy or mature roles," he added. "Whatever the script calls for, I’m ready to do it.”

Diego, the son of Cesar Montano and Teresa Loyzaga, has appeared in a number of drama anthologies and teleseryes for ABS-CBN. He was seen in “Mirabella,” “Wansapanataym,” “Growing Up,” “Maalaala Mo Kaya,” “Pusong Ligaw,” “Mara Clara,” “Pangako sa ‘Yo,” “Ipaglaban Mo” and “Los Bastardos.”