Having dedicated most of his life to his craft, Fernando Poe Jr., otherwise known as FPJ, has been dubbed the “King of Philippine Movies” or simply “Da King.” With over 200 credits to his name as an actor, most—if not all—are unforgettable. 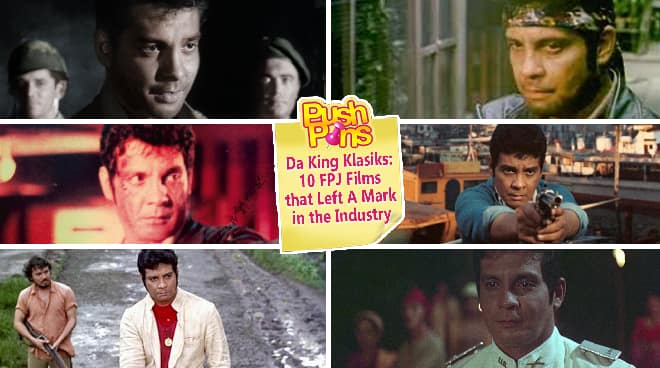 Having dedicated most of his life to his craft, Fernando Poe Jr., otherwise known as FPJ, has been dubbed the “King of Philippine Movies” or simply “Da King.” With over 200 credits to his name as an actor, most—if not all—are unforgettable. Here, we listed 10 FPJ films that undeniably left a mark in the entertainment industry.

Based on the comics of Carlo J. Caparas, ‘Ang Panday’ follows the story of Flavio and his magical dagger. Top-billed and produced by FPJ himself, the film gained much popularity and thus, was followed by three more sequels and had several remakes over the years.

‘Ang Probinsyano’ follows the story of Cardo, a provincial cop who assumes the identity of his departed twin brother in order to go after those who are responsible for his brother’s death. Almost two decades after it was released, the film was rebooted into a TV series. Now running for almost five years, ‘Ang Probinsyano’ has proven itself to be a true classic.

Top-billed by two of the most iconic names in the industry—FPJ and Judy Ann Santos—‘Isusumbong Kita sa Tatay Ko’ tells the story of Badong and his daughter Joey, whose father-daughter relationship was tested by their own venture in love.

Who hasn’t heard of the famous line, “Isang bala ka lang”? It is perhaps the country’s favorite death threat. In case you missed it, that line was born out of FPJ’s film ‘Isang Bala Ka Lang.’ This film tells the story of Berting, an ex-convict cop who brings justice to those victimized by crimes when the law couldn’t.

In the film ‘Kahit Butas ng Karayom…Papasukin Ko,’ FPJ played the role of a military officer, Daniel. After being reassigned to his new unit in Zamboanga, Daniel tries to change the corrupt system inside and earn back the faith of the community in the military.

You’ve probably heard of the famous Filipino saying, “Walang matigas na tinapay sa mainit na kape.” But it isn’t just a saying, it is also an FPJ film. This movie follows the lives of Mike—an ex-convict who was falsely imprisoned for 10 years—and Botchie, a young boy living with his cruel aunt. The two crossed paths and became close friends after Mike saved Botchie from his aunt’s boyfriend.

‘Batas ng Lansangan’ takes us into the chaotic world of drugs. After being sent back to Manila due to an unfortunate incident, army major Ruben Medrano discovers the presence of big time drug lords in the area and fights to cease their operations.

In ‘Asedillo,’ FPJ played Teodoro Asedillo, a former public school teacher turned rebel. He later founded Anak Pawis, a communist-inspired organization geared towards fighting for the rights of the working class. FPJ’s exceptional performance in this film has earned him one of his five FAMAS (Filipino Academy of Movie Arts and Science) Awards.

Reminsce these FPJ films by watching this video:

What is your favorite FPJ Film?