RJ Agustin describes his latest project Kumusta Bro?: “It’s like a narrative series and reality show in one.” 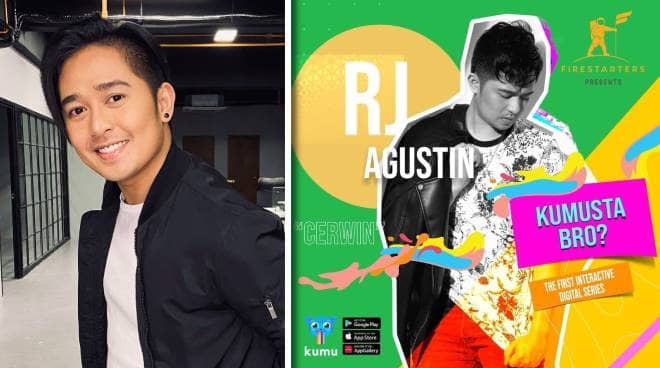 Star Music artist and actor RJ Agustin is the latest addition to the cast of the interactive digital Boys Love (BL) series Kumusta Bro?, which is available on the live streaming app Kumu.

Described to be a “first of its kind quasi-documentary series live streaming weekly,” Kumusta Bro?, which is also starring Pinoy Big Brother OTSO’s Sky Quizon, Bidaman Kristof Garcia and model Allen Cecilio, is a story of “four young men who are in search for love, comfort and companionship” in this digital age.

Joining the show’s fifth episode as Cerwin, RJ described the series and his character. “The series revolves around Thirdy, a live streamer who crosses paths with his old friends Bench, Dean and Cerwin. Together with the live audience, the two rediscover love through cyberspace. I’m with Sky Quizon, Kristof Garcia and Allen Cecilio. I play the role of Cerwin, who is a young entrepreneur who always gets what he wants except the love of his life,” he told Push.

According to the show’s press release, the audience is given the power to interact and shape the story – a feature that makes this show unique. This was supported by RJ who said, “Everything is live. There’s no take 2.”

“In this series, our audience can help us shape the story through voting. So it’s like a narrative series and reality show in one. Unlike other series, here we really don’t know what’s gonna happen in every episode,” the “Sana Hindi Na Lang Kita Minahal” singer added.

He described the experience as “challenging but fun at the same time.”

Viewers can watch Kumusta Bro? through Kumu every Monday, 9:50pm with an encore every Tuesday at Firestarters Studios’ YouTube Channel.