Edu Manzano shared how he became partners with Ben&Ben’s Paolo and Miguel Guico. 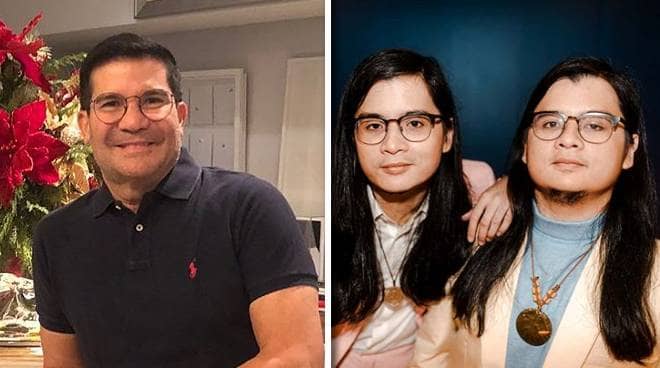 Edu Manzano has partnered with Ben&Ben's vocalists Paolo and Miguel Guico in a new restaurant venture.

The actor-TV host admitted that he initially did not know what Ben&Ben was when he was approached by the Guico brothers to be their business partner.

“A month ago, I never even heard of Ben&Ben. I’m turning 65 next month. I didn’t realize how big a following they have. They have such strong following," Edu said in an interview with ABS-CBN News.

He was able to meet the brothers through his friend Patrick Gregorio. It also happens that the twins' dad Noel Guico is his friend.

“[Patrick] worked with Ben&Ben before. He told me, ‘Edu, you have to met these guys. They are hot.’ Those guys are really, really good," he said.

He continued, “No need of convincing [for me]. Just listening to Ben&Ben’s music, I knew they have to be part of this. Without question, I said yes. I didn’t even have to give it a thought. Ang galing nila," Edu said.

we're now open for bookings! (online events) email us at benandbenbookings@gmail.com -- pangarap naming matugtugan pa rin kayo, nasan ka man. so we've spent a month developing a system that prioritizes safety and health amidst the threat of COVID-19. we want to give the best possible show for you, in a space that is 100% compliant to all regulations regarding GCQ protocols. we're proud to say that we're back! for inquiries, hit us up at benandbenbookings@gmail.com. 📷 @andrewdepano @tonimoons

Their business venture is the 41st branch of JT’s Manukan Grille, which had its soft opening on 115 Kalayaan Avenue.

Edu shared that building the restaurant has been affected by the lockdown amid the pandemic.

“When we resumed after May, we went full blast. We did double shift come June. So far, we were able to catch up. During the MECQ (modified enhanced community quarantine) we didn’t stop and did everything indoors," he said.

Edu added, “We started talking about the operations, how we are going to bring the best out of the staff and deliver the food at the soonest possible time. We’ve been busy non-stop.”