Joshua Garcia and Julia Barretto’s latest mini-movie ‘E-numan’ proves that digital reunions can be just as awkward when breakups are involved. 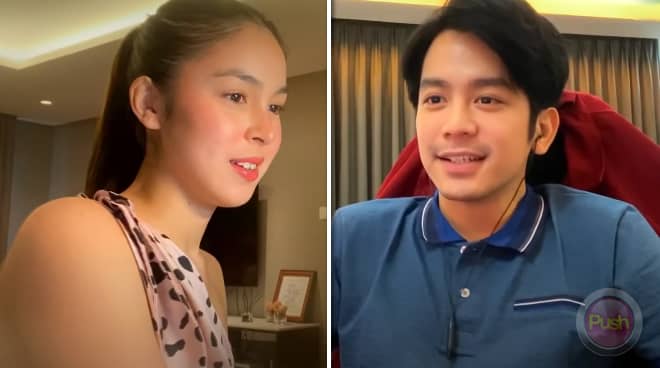 In the Love Unlock special E-numan, Joshua Garcia and Julia Barretto play ex-college sweethearts who finally catch up with each other after their barkada decides to do a virtual reunion via Zoom while everyone is doing quarantine at home. Beej, played by Joshua Garcia, is a news reporter who covers the hospital and crematorium beat, while Tin, played by Julia Barretto is an accomplished scriptwriter for films.

Their barkada, played by supporting cast members Trina Legaspi, Kazel Kinouchi, Royce Cabrera, Milo Elmido Jr., liven up the casual meeting as they try to catch up on each other’s lives after graduation. While playing the game Never Have I Ever, tension builds up when Tin brings up the hurt brought about by a “kissing scandal” video between Beej and their other barkada member Sasa, who is also in the virtual chat.

When Sasa accuses Tin of being bitter, the latter escalates the tension by talking about how betrayed she still feels from her ex-boyfriend and former best friend. In E-numan, the onscreen chemistry between Julia and Joshua is strong, which makes viewers want to believe that some of the lines look more real than just reel.